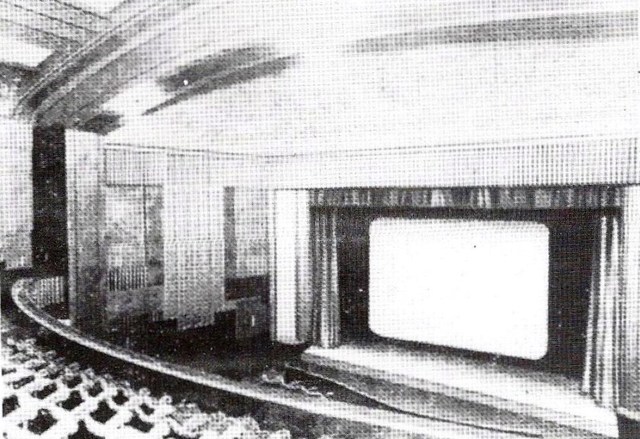 The Carlton Cinema was a creation of J. T. L. Mallard and designed by the architecural firm Drury & Gomersall of Manchester. It was in a typical 1930’s Moderne style and was opened by the Arderne Cinema Co. Ltd. on 28th July 1937. There was a large orchestra pit and full stage facilities but no organ. In the basement was located a cafe.

In 1954 the Essoldo became the town’s first CinemaScope cinema and for many years was the only cinema to offer full stereophonic sound. “The Robe” was the first widescreen film to be shown followed by “How to Marry a Millionaire”. At the height of the “Davy Crockett” craze, in 1956, Fess Parker made a personal appearance at the Essoldo.

The cinema was demolished in 1994 and a small park occupied the site for several years. By 2011, offices had been built on site, which are occupied by Sky Television.

Two photos taken when it was the Cannon Cinema here :–

and as demolition started
View link

Going to the Essoldo marked my introduction to cinemagoing. I was taken here by my mother and Godmother on my fourth birthday in April, 1951, to see the Cecil B. De Mille Technicolor epic SAMSON AND DELILAH. I can still see Victor Mature pushing apart the stone pillars that supported the Temple of Dagon and quite literally bringing the house down. I also remember I kept turning around in my seat and looking at the dancing beam of blue-ish light that came from way up there and seemed to have something to do with what was going on on the screen, never dreaming at that time that one day, I, too, would become a projectionist…although not at the Essoldo, Stockport.

Photo uploaded of newspaper ad for the live show, ‘The Rolling Stones’ and ‘Peter and Gordon’.

The four ‘super cinemas’ in the town (ABC Ritz, Plaza, Essoldo, Davenport) all had stages and dressing rooms but it seems strange that an important show such as this played the Essoldo as opposed to the ABC which, at least upon opening, had 600 more seats.

In other towns where ABC and Essoldo had stage facilities , most notably Stockton and Huddersfield, ‘The Rolling Stones’ were always to be seen at the ABC.