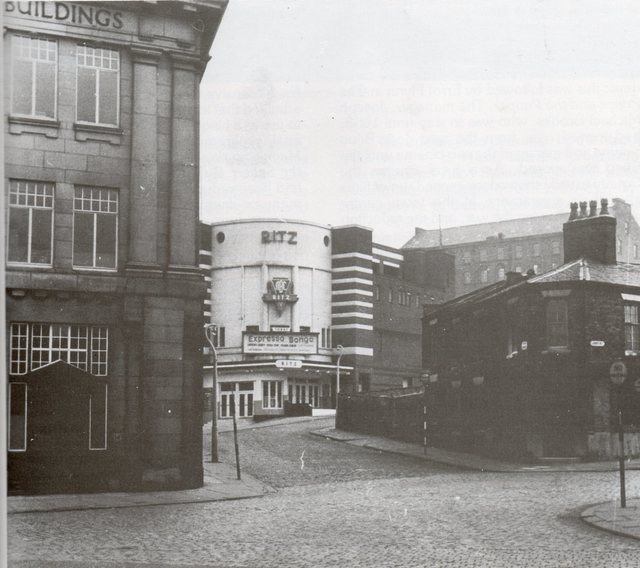 Located on the corner of Duke Street and Piccadilly. Planned by the Union Cinemas chain, they had been taken over by Associated British Cinemas(ABC) in October 1937, and the Ritz Cinema was completed and opened by ABC on 3rd January 1938.

The original seating capacity provided for 1,627 seats in the stalls and 716 seats in the circle. It was equipped with a Wurlitzer 3Manual/8Ranks organ, which had a curved console, opened by organist Wilfred Southworth. There was a large stage and dressing rooms.

It was renamed ABC in 1961, and in November 1970, it was closed for a month to convert the circle into a ‘Luxury Lounge’ seating area and the seats in the stalls were removed. This caused problems with the sound, so the stalls seats were reinstated. The ABC was taken over by an independent operator on 2nd April 1978, and it reverted back to the Ritz name. The Ritz Cinema was closed in December 1982, and was demolished around 1986. Since then the site has been used as a car park.

Vintage photographs of the Ritz Cinema/ABC, and its Wurlitzer organ console:
http://www.ukwurlitzer.co.cc/2213.html

Spent a couple of very happy years at this cinema, initially as third projectionist and later as assistant manager to the manager Mike Ronan.

Sorry Ken, but your not quite right on a few things. Once the site of the Ritz was cleared after demolition, it became a car park, which it is to this day (I should know, I parked my car in what was the stalls!) Regal House stands opposite where this cinema was. Also, due to the ABC take-over, the Ritz never had a fly-tower, in spite of having a large stage and dressing rooms as you say. The Wurlitzer Organ also had no piano attachment, however a ‘visiting’ piano was brought in on occasion when the organ was featured. There was also no restaurant ever installed, again, cut-backs due to to the ABC take-over. It would appear that the Ritz/ABC was scaled back quite considerably due to the take-over by the ABC chain. It wasn’t demolished until several years after it had closed, I think, 1986/7.

It was refurbished as a ‘circle only’ operation initially (as opposed to ABC Birkenhead which was done at around the same time but with stalls only) and the downstairs seats were removed. There were then considerable problems with the sound as a result and the stalls seats were replaced and the two seating areas were both again open to the public.