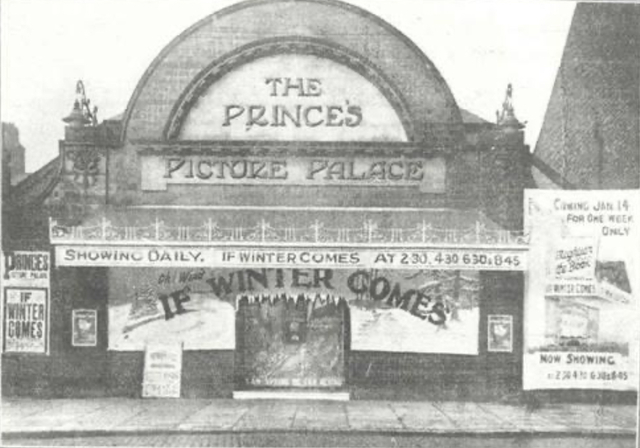 The Prince’s Picture Palace was opened on 26th October 1911. Designed by local architect William Swann, all seating was on a single floor. In 1920 it was taken over by the operators of the Super Cinema and the two cinemas often screened the same programme, and both shared the same newsreels.

In April 1929 it screened the silent version of “The Jazz Singer starring Al Jolson, with local singer Fred Shaw engaged to sing the musical numbers. It was equipped with a Western Electric(WE) sound system on 19th May 1930 when the first ‘talkie’ to be screened was "The Movietone Follies of 1929” starring John Breeden.

It underwent some modernisation in 1939, but later became a second run cinema. The Prince’s Picture Palace was closed on 6th January 1951 with Bing Crosby in “East Side of Heaven” supported by a Three Stooges short and a newsreel. It was sold to the retail tailor Montague Burton and was demolished in 1955 as part of a council redevelopment. The new building on the site, which had a second floor was in use as a furniture store in 1956.