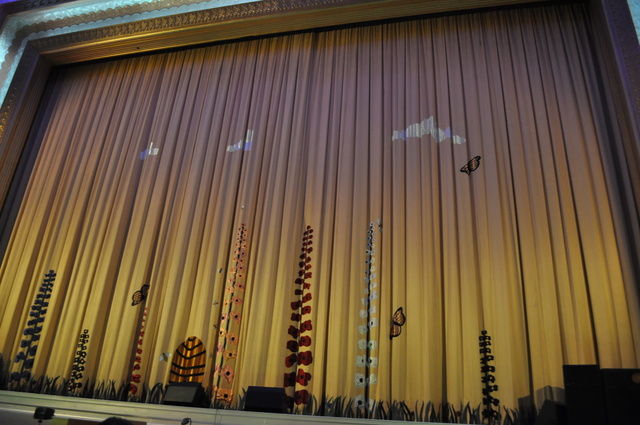 Built in 1932, plans were drawn by architect Thomas Thornley, but the G.B. Snape Group of Assc. Cinema Companies wanted it to be similar to their Regal Super Cinema, Altrincham designed by architectural firm Drury & Gomersall. Thomas Thorney was given the task to amend his designs to match the Drury & Gomersall designs and D & G agreed, so long as their name was not given as architects. The Plaza Super Cinema first opened its doors to the public on Saturday, October 8th, 1932 with a charity show for Stockport Infirmary. The original seating capacity was 1,878, in stalls and circle levels. The films shown were Stan Laurel and Oliver Hardy in “Jailbirds” and Gene Gerrard and Jessie Matthews in “Out of the Blue”.

Early programmes were a mix of cinema and live performance, or ‘prologues’ as they were known. The Plaza Super Cinema was equipped with a Compton 3Manual/11Rank theatre organ which has an illuminated surround on the console. The opening organist was Cyril Chadwick. It is still played today. There is a café/restaurant located on the circle lounge level.

In early-2009, it was closed for a full renovation and refurbishment, both externally and internally. Costing £3.2 million, false ceilings inserted in the 1960’s have been removed, and original plasterwork revealed again. The café/restaurant has been restored.

The Plaza Theatre reopened on 11th December 2009 with a cine/variety show, similar to its original 1932 opening show. The main film was “Gold Diggers of 1933”, with Stan Laurel & Oliver Hardy in “Towed in a Hole” plus soprano Marilyn Hill-Smith leading a tribute to Gracie Fields with the Plaza Orchestra, and Richard Hills playing the Compton organ. Seating is now provided for 614 in the stalls, 318 in the front circle and 254 in the balcony(rear circle). The decorative details in the café/restaurant area has been beautifully restored, after years of being hidden behind false panels.

The Plaza Theatre was upgraded from a Grade II to a Grade II* Listed building in 2000.

Photographs of the Plaza Theatre on its re-opening night 11th December 2009:
View link

Photographs of the restored Plaza Super Cinema and Variety Theatre , taken within a week of reopening in December 2009 can be found here

It really is a stunning building and the LED Holophane lighting is amazing!

Great pics.Thanks Ian for putting them on.

The great thing with this theatre is that the people working there LOVE the building and are so proud of it – this really is apparent to visitors.

The work just completed is not the end of the restoration – new projects are still in the pipeline to further enhance the Plaza. This one of just a handful of “super-cinemas” remaining in the UK where you can still enjoy a movie with full 1930’s atmosphere.

To contrast with the above pictures, here are two photos of the Plaza as a Mecca Bingo Hall, taken in 1988:–

Following a recent visit to the Plaza, I`ve never seen such a beautiful theatre..

In a way, the Plaza was the Odeon of Stockport, as it ran the current Rank releases at the same time as the Rank Odeon’s.