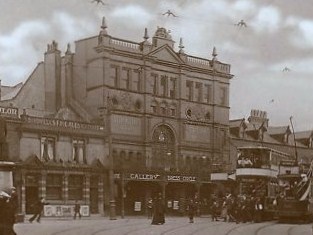 Located in the centre of Stockport, Cheshire. The Theatre Royal was designed by theatre architect Frank Matcham in 1888. On 29th June 1896, it was screening a programme of Lumiere’s Cinematograph. In November 1901 it presented the Phono-Bioscope, an early talking picture apparatus. That Theatre Royal was demolished in 1904.

The Theatre Royal & Opera House was again designed by noted theatre architect Frank Matcham, and opened on 5th September 1905. It was built for the William John Revill who had operated the earlier Theatre Royal. In December 1916, it presented D.W. Griffith’s “Birth of a Nation”.

Later known as the Theatre Royal, it operated as a variety theatre as well as presenting musicals, plays and pantomimes, and remained in the Revill family for its entire life. The Theatre Royal was badly damaged by a fire in 1960. It was subsequently demolished, leaving only the facade standing. By 1968, the facade was also demolished.

There is quite a bit of history and memorabilia of the Theatre Royal in Stockport on this webpage.