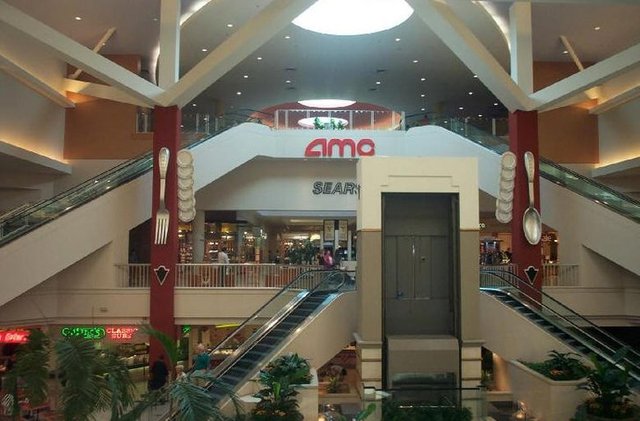 After the General Cinema twin screen closed in 1991, the Valley View mall was without movie theaters for more than 10 years. This megaplex opened over the Sears store as the AMC Valley View 16 on May 14, 2004.

The Valley View Mall had a twin screen theater in its basement from August 17, 1973 to 1991 with the General Cinema Valley View I & II. But the mall would be theater-less for more than ten years until the 2004 entry of the AMC Valley View. The genesis of the AMC Valley View Center theater dates back to a failed attempt in 1994 by AMC and its EDG affiliated branch to build a $94 million 24-screen entertainment and dining mall complex between Valley View and the nearby Galleria shopping mall just west of Valley View. But the AMC project lost traction as did a previous 18-screen Cinemark theater plan for that same general area that was vetoed by the Dallas City Council.

With Valley View at 93% occupancy and nearby Prestonwood and NorthTown malls both eliminated, AMC and mall specialist Macerich, the relatively new owner of Valley View, felt the1973-built mall was a winner. When the plans to build above Sears became entangled, those plans were scrapped and the project was delayed. Macerich solved the problem by opening the middle of the mall and creating a space for AMC as the focal center of the mall two floors above above the food court. The film industry trade publication Variety warned of building theaters into aged malls as the mall shakeout was in full force entering the 21st Century.

The now 16-theater concept by Omniplan Architects — the same group responsible for the nearby Northpark Mall — finally opened May 14, 2004 with two Dallas Cowboy players and the mayor in attendance. Auditoriums all with stadium seating capacities ranged from 92 to 299 seats. Optimism abounded. But within three years – as the Variety article had predicted – Valley View would begin a gradual decent to greyfield status, an industry term akin to a “dead mall”. Macy’s – which had been in the mall just over one year – had seen enough of Valley View and quickly bailed. Then Dillards. Then JC Penney. Even the mall’s carousel in the center of the complex departed. The mall had just a once-free standing Sears opened in 1964 as its only retail anchor. AMC had a ghost town theater sometimes with more screens than actual customers.

In 2010, Macerich didn’t make the mall payments and it was in the hands of Bank of America. AMC would change its pricing structure to a low-cost first run pricing policy ($4/$6 shows) to bring in anybody as theaters within striking distance including the Look Cinema, Alamo Drafthouse, and Studio Movie Grill Keystone opened to the north and east. Thanks to social media and certainly not due to any AMC advertising – there was none – audiences actually gravitated to the dying mall to watch current movies. Ten years into its life, the theater had finally found its audience.

The theater was further encouraged by a new mall owner in Beck Ventures who in 2012 planned to have AMC at the heart of a $3 billion transformation of Valley View that would be completed by 2017. AMC hedged its bets by announcing its AMC Village on the Parkway, a 12-screen then reduced to 9-screen luxury cinema just yards away from the former General Cinema Prestonwood / Montfort theater and 2.5 miles north of Valley View. As of 2014, it was unclear if the ambitious Valley View project would be completed so the theater soldiered on with its low price concept and its luxury cousin Village on the Parkway opening in November of 2014.

Update: The still-functioning theater and greyfield status mall were discussed in a city council meeting in June of 2016. Beck Ventures announced demolition at the end of 2016 with a new, smaller 10-screen theatre proposed for the former Valley View Center spot. Rendering of the proposed AMC Midtown is in photos.

You can see the wrecked and tattered remains of Valley View with the AMC portion of the complex still standing as you travel the 635 freeway. Frankly, they really should put the theatre out of its misery.

Just to point out the lease is up in 2021 but it most likely will close then. The mall is officially closed and is only “open” for access to the theatre. The anchor buildings have all been demolished and to progress with the Dallas Midtown project the rest will need to come down too.

In the meantime, as it walks it’s slow death march into oblivion, AMC’s now charging only $5.99 a ticket all day every day for FIRST RUN flicks. Needless to say, they’re packing em in at those prices!

AMC shuttered numerous AMC Classic name-plated and inherited locations mostly from the Carmike Cinemas merger during the Summer of 2020 as it plotted its COVID-19 pandemic business strategy with reduced locations.This venue had originally opened as an AMC theatre and the circuit removed its “Classic” designation from this location during the pandemic as it reopened In the former Valley View Mall space on August 27, 2020. The venue’s name at reopening reverted to its original, AMC Valley View 16 (now minus the “Classic”). Good news for folks looking for new films at “popular pricing.”