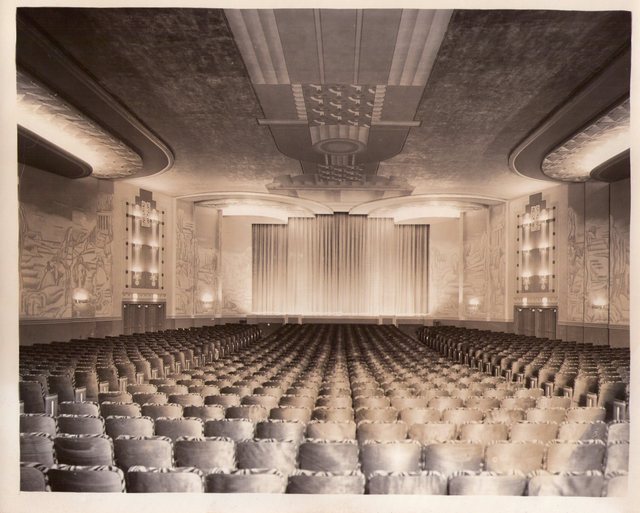 The Reed Theatre was part of the Alexandria Amusement Corporation which also operated two other movie theaters on King Street: the Richmond Theatre and the Ingomar Theatre. The theatre was named after company’s president, W. Harmon Reed.

Designed by architect John J. Zink, the Art Deco style theater featured a neon, vertical sign and marquee. The interior lobby had mirrors and walnut wood finishes, and the theater was decorated with murals showing scenes from Virginia’s history. The Reed’s storefronts on the 1700 block of King Street offered retail space to a clothing store, drug store, car sales office and, later, a restaurant.

When it opened on April 5, 1937 the Reed Theatre was one of the largest theaters in Virginia with about 1,400 seats and an estimated 1,000 parking spaces. The Reed Theatre showed first-run films and news reels but also served as an auditorium for large special events including high school graduations and a live musical performance to raise money for war bonds.

By 1970, attendance at Alexandria’s older theaters had declined significantly and the Reed Theatre attempted to draw customers with $1 tickets on Mondays and Tuesdays. The next year the Reed Theatre began showing X-rated films. When that failed, it offered movie classics like “War and Peace.” The Reed Theatre closed down a few years later and was demolished in the winter of 1979-80.

The Reed was very “Art Deco” in design. Even the stairway to the projection room was curved (like the lobby wall). The booth ran Simplex E-7s with Peerless Magnarc Lamps. The Reed booth was the long time job of Sam Dale, Business Agent of IATSE Local 619, Mixed local Alexandria Virginia. The Union telephone was installed in the Reed booth, it was the closest thing there was to a Union office, and Mr Dale conducted business there until the late 60s.

great place not only for movies but for concerts and plays. I go by the old location often and in my mind I can still see the Reed standing.