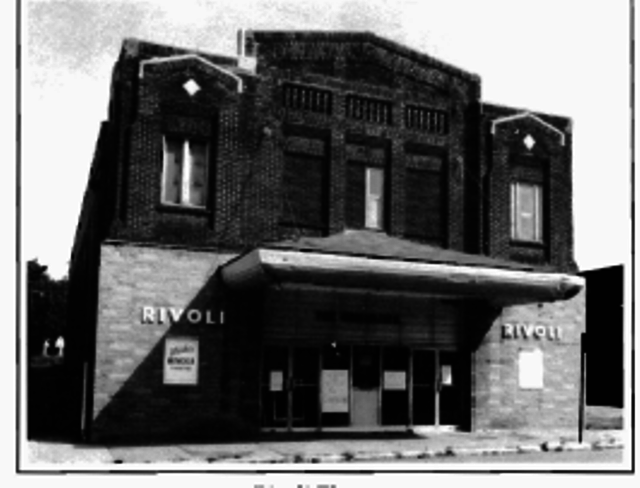 The Rivoli Theatre was considered the classier theatre in Portage, PA. Like the Rex Theatre in town it provided good entertainment with a lot of ‘A’ pictures. It was opened by 1928 and continued until at least 1950. Operated by Stern-Hanna Theatres, who’s home office was 1701 Boulevard of the Allies, Pittsburgh, PA.

Portage is puzzling. The 1914-1915 American Motion Picture Directory lists four theaters at Portage, but none are called the Pastime, Rivoli, or Rex. They were the Colonial, Globe, Grand, and Lyric, the last of which was located on Main Street. I’m looking for more information, but have an appointment so I’ll have to get back to the search later.

I already posted the Grand, which was at 6-something Main.

The October 1916 Sanborn only shows the Grand and Pastime. I went carefully through all 7 pages to make sure. Of course, they might have come and gone by then.

The next item is from the June 10 issue of the same publication:

“George Wasko installed 3-D equipment at the Rivoli, which he recently acquired. He is closing the Rex five days a week.”So in the 1950s, at least, we have a Rex and a Rivoli both operating at the same time. I haven’t found any other items mentioning both houses at the same time, but the May 1, 1937 issue of Motion Picture Herald has this item about the Rivoli:

“R. Allison has completely recarpeted his Rivoli theatre in Portage, Pa. The installation was made by Louis Weinger of the Hotel and Theatre Carpet Company of New York.”

The September 26, 1941, issue of The Film Daily lists the Rex, Portage, as one of several houses having new carpeting installed. It would be unlikely that the same theater would get new carpeting twice in four years.

How can we square that with the earlier information you found? I’m so confused. At any rate, if the address is right, this HAS to have been the Pastime. Maybe it never was the Rivoli?

It’s undoubtedly safe to assume that the Sanborn maps are a more reliable source of information than the theater industry trade journals, and that the Rex was never located on Gillespie Street, so we should look elsewhere for it.

I’ve found a source indicating that a house called the Rivoli was in operation at Portage at least as early as 1928 (The Daily Worker, oddly enough, which reported a meeting of 800 miners held at the Rivoli on April 12.)

The most likely source for the confusion about the Rex would be the October 25, 1931, Film Daily item saying that C. O. Baird had remodeled and reopened the old Pastime and renamed it the Rex. Trade journals often got their information about small town theaters from the guys who delivered films for the distribution companies, and those guys made a lot of mistakes.

It could be that it was the old Grand that Baird was reopening as the Rex. I’ve found no mentions of the Pastime in the trade journals from later than 1926, so it’s possible that the guy passing the information to Film Daily in 1931 knew that house only as the Rivoli, and simply conflated the name Pastime with the name Grand. Since the Grand had closed by 1926, someone who had been delivering movies to Portage for only a few years or less would have had no first-hand experience of that theater at all.

This is just speculation, of course, but it would fit the timeline of events in Portage during the 1910s and 1920s that we do have, and knowing how sloppy the trade journals often were makes it even more plausible.

Okay, I have to rethink this again as I’ve found another reference to the Pastime in the August 23, 1931 issue of The Film Daily. As it was a report of the house closing, I don’t think the item is likely be using the wrong theater name. So we’re back to a house called the Pastime becoming a house called the Rex in 1931, but no closer to figuring out where it was.

This building is specifically labeled as the ‘Pastime’ on the Sanborn, and it is the building that replaced the old Baird Opera House and which the ‘New Pastime’ moved into when it was constructed. That is where it has to start. How the Rivoli and Rex come in is a bit fuzzy.

One possibility I can imagine, since there is the reference to 800 miners meeting at the Rivoli 1928, is that Baird renamed this house the Rivoli in or before 1928 and moved the name Pastime to another location, possibly the former Grand, which then became the Rex in 1931. The local newspaper’s files would surely be of help, but unfortunately I can’t find any Portage newspapers from that period online.

That at least makes sense. Now we have to find out if it’s right.