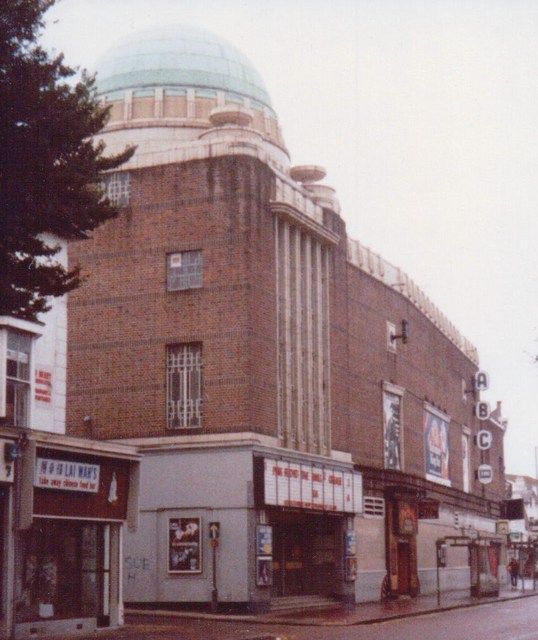 Located in the East Sussex seaside town of Eastbourne. The Luxor Cinema was opened on 3rd April 1933, and was built for the independent Walter Bentley circuit. The entrance at the left side of the building is surmounted by a large dome, with the auditorium running parallel to the road. Inside the auditorium seating was provided in stalls and circle levels. The proscenium was 40 feet wide, the 25 feet deep stage was used in the early years for cine-variety acts and concerts by famous dance bands of the day. The Luxor Cinema was equipped with a Compton 3Manual/6Ranks organ with illuminated console, which was opened by organist John Howlett.

It was re-named ABC in February 1962. The Compton organ was removed from the building in 1972, and the cinema was closed on 2nd May 1973 for twinning. The circle became a 585-seat auditorium. A new proscenium was built in front of the original one. A second screen was created out of a former cafe space, with seating for 159. The stalls area became a Painted Wagon bar.

When the Cannon Group took over the cinema operation in 1986, it was re-named Cannon. The bar in the stalls became an independent bingo club, known as the De Luxe Bingo Club, with the part of building which had become the small auditorium in use as a bar, known as the Luxor & Seven.

Cannon opened a brand new 6-screen multiplex east of the town centre at The Crumbles in August 1990, and the former Luxor/ABC/Cannon was closed as a cinema on 21st February 1991. The bingo club remained open until its closure in May 2011. It had reopened by early 2020 and another past of the building (foyer?) was in use as as a children’s soft play area.

I think the circle was kept as a single unit, the No 2 screen being located elsewhere (cafe perhaps?)

The interior is a pleasant surprise when one considers how unexciting the exterior is, I like it.