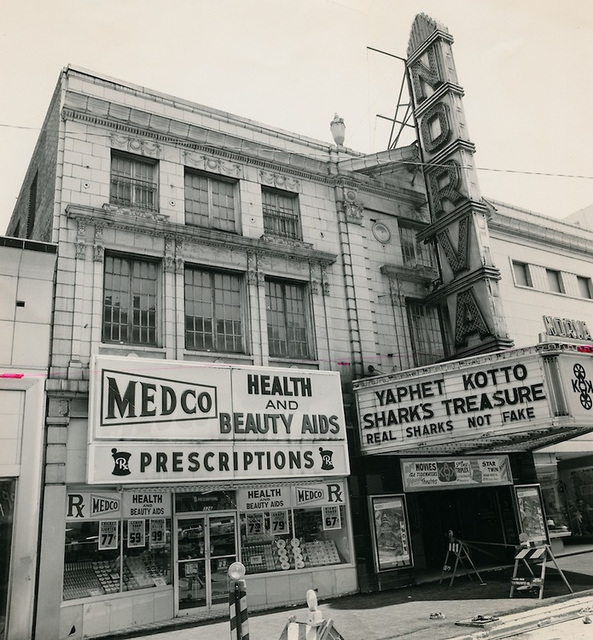 The Norva Theatre (which is named for Norfolk, Virginia) originally opened in 1922, as Norfolk’s first true movie palace, and sat just over 2,000. Though nowhere near as ornate as Thomas W. Lamb’s Loew’s State Theatre, which opened four years later (now the Jeanne and George Roper Performing Arts Center), the Norva Theatre nonetheless was the grande dame of Norfolk’s downtown movie houses for decades.

After the revitalization of the long-dormant downtown Norfolk in recent years, including the old long-closed Norva Theatre, the former movie palace was transformed into the city’s most popular and exciting concert venue.

Offering three levels and around 1,500 seats, with excellent accoustics, high-tech sound and lighting, and an industrial appearance inside (though the exterior, including its marquee, retain their 1920’s appearance), the Norva Theatre has become of the THE place in Norfolk to see and be seen.

Every sort of musical genre from punk to R & B, heavy metal to dance and everything in between has been featured on the Norva Theatre’s large stage.

During the mid 50’s the Norva Theatre seated 1637 people.

A correction of the description. The NorVa may be able to handle 1500 people but most of them will be standing. The theater seats have all been removed.

I also remember the Norva being located on Granby in the early 1970s. In fact, I remember a little bar around the corner … oh, never mind —– I’ll save that for TavernTreasures.com.

Lost Memory, interesting ticket, do you have anymore from Norfolk?
If I remember right Granby Street was higher than Monticello Avenue. The old entrance was on Granby and the floor of the theatre pretty much was at the same slope as the ground it was built on. The stage would then be at about the same level as Monticello.
Loew’s State was the same way and in fact in about 1989 the entire front of the State was converted to retail and if I remember right, if you went down the hill to the back of the State on Monticello a GYM sign was at the stage door! That has all changed since the State has been restored, I would guess!
I think the NORVA has pretty much been gutted and I would guess the Granby side is now all retail (Granby is or was Norfolk’s “Main Street”) and the entrance to the theatre would now be at the stage door level. This all of course is only a guess. What would I know, I’m now in the Chicago area. I hope someone in NorVa can fill us in.

“Ladies and Gentlemen, This is CINERAMA!” Lowell Thomas

Don; Thanks for the postcard of the Norva and Loew’s. You may want to also put the postcard on the Loew’s site which is under the Jeanne and George Roper Performing Arts Center?

Alfred Hitchcock’s groundbreaking thriller “Psycho” played at the Norva in 1960. I remember browsing through old newspapers on microfilm at the library and finding an ad for that. I am sure the audience screamed a lot. Nothing like it had ever been seen before.

Looking for help from anyone that may have information on the following. On March 20, 1951, the actor Bela Lugosi, of Dracula movie fame, presented his “Horror and Magic Stage Show” in person at the Norva Theatre. I have all the newspaper advertisements and publicity stories from the local papers for this. However, I am posting here on the off chance that someone still alive may have actually gone to the show and could contact me with their memories of it. Or possibly someone may be in possession of an original ticket or poster that they might give me permission to scan. In any event, anyone having any additional information on this could contact me at I would really appreciate it and thanks in advance!