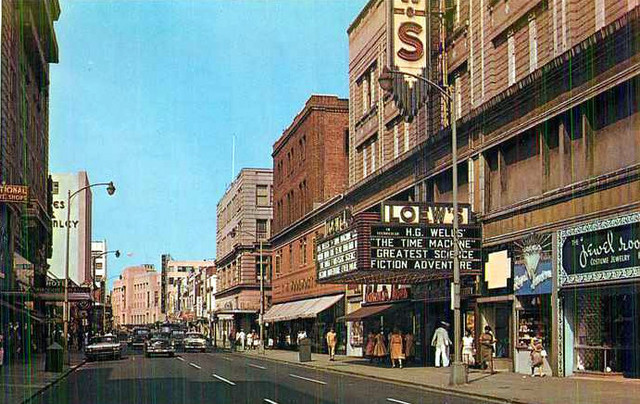 Opened as a combination vaudeville and movie house on May 10, 1926, the Loew’s State Theatre had 2,100 seats, and housed everything from first run films to variety shows including names like Milton Berle and Eddie Cantor. By the late-1950’s it was known as Loew’s Theatre. It was closed in the late-1970’s, reopened briefly as a rock club named The Premier Theatre, then shuttered and remained dark for 20 years.

As part of the general Norfolk, Virginia downtown revitalization, in 1999 the theatre underwent a $10 million renovation that reduced the overall size of the auditorium to a roomy 862 seats. Spaces formerly occupied by the mezzanine were repurposed as lecture halls for its owner, Tidewater Community College. The original elegant décor was maintained, but technology and infrastructure were added to enable a modern and functional center for the performing arts.

In 2000, Tidewater Community College and local officials dedicated the old Loew’s Theatre in honor of its new home with the Norfolk, Virginia campus. Since reopening as the TCC Roper Performing Arts Center, it has hosted hundreds of national and world class arts attractions, including The Royal Shakespeare Company, the Netherlands Dance Theatre, Art Garfunkel, the Guthrie Theatre Company and the Emerson String Quartet.

The former Loews State Theater in Norfolk, Virginia, now owned by Tidewater Community College, has been renamed the Jeanne and George Roper Performing Arts Center. The renovated facility has been open for just over a year and has held a wide range of performances, including local theater and dance companies, performances by the Virginia Symphony, various jazz artists, internationally known classical artists, plus the sole U.S. appearance by the Royal Shakespeake Company. On November 1, 2001 the first film was shown in the theater since 1978. “Restless”, the first joint U.S. & China co-production, written and directed by Jule Gilfillian, was shown in 35mm on a brand new screen to an enthusiastic audience.

Growing up in Norfolk VA there were two large theatres still open downtown, The Lowes and The Granby. The theatre was known only as The Lowes, The name State was not used in the late 50s. The marquee in the picture reads â€œHG Wells The Time Machineâ€, I saw the Time Machine at The Lowes with a neighborhood birthday party. I remember the theatre had stained glass exit signs over the fire exits and each exit was numbered on the stained glass sign. Also the balcony was really more of a mezzanine as that it was not over the orchestra seats. Everything about it was big when I was a kid.

Note to above comments… The Norva was the other Large Downtown Theatre… The Granby was there but one of several smaller theatres.

The Roper Center’s official web page is: http://www.tcc.edu/roper/ From there is some history, renovation info and color photos, both interior. Looks like a simplified renaissance revival scheme, but also possibly simplified by the renovation. The auditorium is fairly wide with a low ceiling – looks like it originally had no balcony and that they reduced the capacity by building a shelf balcony in the middle of the auditorium with all the space behind it converted into separate rooms. Still looks really nice though and very attractive. The page says it was built in 1926.

Nice shot of the Loews.

My father remembers Lowe’s having an organ(circa 1930’s). He walked to the theater from East Ghent.

A summary of the organ’s history can be found at http://theatreorgans.com/AU/opus/OP12/OP1256.htm. As of September, 2015 the 3-rank console now resides in Auckland, NZ (http://theatreorgans.com/wota/). The console can be seen in the photos associated with this theater, both in the lower-left hand corner of the historic shot of the stage, and obviously in the photograph provided by the Auckland Wurlitzer Organ Trust.