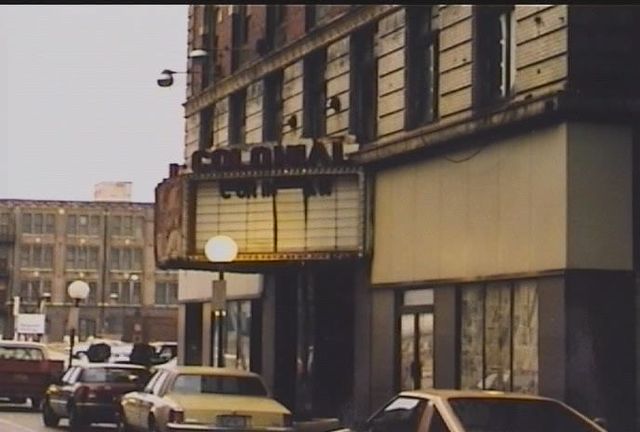 The Colonial Theater was built about 1907 as a legitimate theater in Norfolk, VA. It was located on W. Tazewell Street in Downtown Norfolk, near Boush Street. It was built during the Jamestown Exposition, a commemoration the 300th anniversary of the founding of the first permanent English settlement in the Virginia Colony. Being in the segregated South, there was a separate entrance for African-Americans, which opened to a staircase leading directly to a balcony, where they were required to sit. The first show at the Colonial Theater was a live production of “Pocahontas”. The theater later became a movie theater and vaudeville house. Mae West and Fred Astaire were some of the legendary entertainers said to have played the Colonial Theater.

After the demise of vaudeville, the Colonial Theater was a movie theater from the 1930’s through the 1970’s. It was one of the first theaters in downtown Norfolk to fall into disrepair in the 1960’s and be used to show adult films.

I saw the inside of the empty theater in 1977. It had been closed for a while and was in poor condition, having last been used some time in the mid-1970’s. Dressing rooms for performers were still intact. The theater appeared to have been originally built with two balconies, and the second balcony had been retrofitted to accommodate a film projection booth.

I recall walking around with a flashlight and seeing beveled mirrors on the walls of the stairwells to the first balcony, and it struck me that this was once an extremely elegant theater. I found an old program of some type. It was from the 1920’s, and it made some mention to Theda Bara, an actress in silent films. I saved that program.

The Colonial Theater was demolished some time in the 1980’s or 1990’s, and definitely before 1997, when I moved from Norfolk.

A 1907 guidebook called Illustrated standard guide to Norfolk and Portsmouth and historical events of Virginia 1607 to 1907 describes the Colonial Theatre briefly:

The Colonial Theater is located on Tazewell Street, between Granby and Boush streets. This is a new and modern playhouse, where only the highest class attractions are presented. This is one of the Schubert [sic], Belasco theaters, which insures only the very best productions of musical comedies, operas, and dramas. Prices of admission range from $2.00 to 25 cents according to location, and the seating capacity is about 1,800.“

A hotel was to be part of the Colonial Theatre project from the beginning, as noted in the October, 1905, issue of Engineering News:

The November 23, 1905, issue of Manufacturers' Record had another item about the project:

“Norfolk, Va.—Theater and Hotel.—The Colonial Theater Co., previously reported incorporated to erect theater and hotel, is having plans prepared by Albert Swazey [sic], New York, for the erection of seven-story building, to cost $100,000: the theater to have a seating capacity of 2000. C. A. Woodward is president.”

The December 14 issue of the same publication had a notice that J. H. Pierce had the $125,000 contract to erect the theater. Architect William Albert Swasey designed some thirty theaters in New York City alone, and numerous houses in other cities.

I appologize for the wording of my previous post. The building was modern for it’s time. However, by the time of my visit, the utilities were damaged and not useable, including the electrical system. The electrical system was one of countless obstacles preventing the reopening. I was told the building even containted an early cooling system and that some of the apparatus was still in the building. I did not see the remaining cooling equipment.

My partial tour of the theater was by accident. I was walking on Tazewell and noticed the lights, Christmas decorations, and the notice about the play. I cannot recall the name of the play and I did not know and had never heard of the Fitzgerald’s. There was a sign in the lobby welcoming visitors. Part of the sign read something to the extent “Merry Christmas, come inside, make yourself at home.” I entered the lobby, was approached by Mr. Fitzgerald, and was promptly given a partial tour. There was a door on one side of the stage that I was told led to several levels of dressing rooms. According to Mr. Fitzgerald, theater equipment was still in storeage. As the previous post pointed out, there was junk throughout the theater spanning the decades of operation. At the time of my visit the Fitzgerald’s were in the process of collecting and sorting the material they had found. They had large file folders of paperwork collected from here and there they hoped would aid in writing a history.

A directory available on the internet from 1917 list the address of the Colonial as 116 West Tazewell St. The same directory list the address of the Hotel Princess as 118 West Tazewell St. The building was never at the corner but stood directly at the rear of the Thomas Nelson about midway between Granby and Boush. From at least the early 1970’s the corner lots were vacant and occupied by a parking lot. I don’t know what’s at the corner now.

norfolk356: What is on the corner now (and extending along Boush Street all the way to College Place) is an enormous building called Harbor Heights. It has retail space on the Boush Street side of the ground floor, with fourteen floors condominiums and lofts above. The parking garage extends east along Tazewell about two thirds of the way to Granby Street, so the Colonial’s site must be under its footprint.

Thanks. I clicked on the street view option, which I had not done, and saw the new building. That’s how it looks to me as well. The theater was about where the parking garage is now located. About where the fire escape is visible on the rear of the Tazewell Hotel(formerly the Thomas Nelson) is where the bridge that joined the two buildings was located. It was a multi story bridge that connected the upper floors of the Thomas Nelson to the hotel portion of the Colonial buiding. The basement opening to the left of the Tazewell Hotel entrance was once the street entrance to a barber shop(circa mid 1950’s). The barber shop was also accessible by another entrance from inside the hotel. Around the corner on Granby where Snapper’s is located was the location of the restaurant that serviced the Thomas Nelson. It was accessible from either the Granby entrance or glass doors inside the hotel and near the lobby. As the hotel declined the entrance off the lobby was kep’t closed and locked although never walled over to my knowledge.

Do you know if the Colonial had boxes? I seem to rememer one or two boxes on the east side. Is my memory correct or am I confused?

I never saw the Colonial Theatre, nor have I seen photos of its interior, but it was a legitimate house built in the early 20th century and I’ve never come across any good-sized theaters with stages from that era that didn’t have boxes. It’s very unlikely that the Colonial would have been an exception to the rule. Boxes were typically the highest-priced seats in a house, as a lot of well-to-do customers preferred them.

Boxes were sometimes removed from old theaters that were extensively modernized for movies in the 1930s or later, and during the silent movie era the pair of boxes nearest the stage would in some cases have to be removed to accommodate pipes and an organ screen if a pipe organ was installed, but I don’t think the Colonial was ever extensively remodeled, so it probably kept at least some of its boxes even if it got an organ.

Thank you for the information. I was only in the building two times and only once in the auditorium. Because of little lighting, the cold, and the pidgeons flying about, my mind was not as fully concentrated on the details as I wish it had been.

The room above the box office the Fitzgerald’s used as their office was a large room with a very high ceiling. Plaster had fallen in many places and the framing around the large windows was in terrible condition. The Fitzgerald’s heated that room with a space heater which barely made a dent in the cold. They worked under layers of blankets.

If my memory is correct, the several levels of dressing rooms were located behind a door on the left side of the stage(west side). I saw the door and the stairs but I did not go beyond the foyer. I was told the west side lacked a fire escape which was another major problem that would have to be resolved. I assume the fire exits for the dressing rooms had been sealed and the ladders removed sometime after the theater was only showing movies.

The Fitzgerald’s changed the name of this theater to The Corinthian and in 1977 attempted to start it as a legitimate theater. I have posted the story on the photo page.

I can’t read the newspaper article. Do you know of anything I can do to get a better image? If no, don’t worry.

If the pic in the newspaper advertisement is inside the auditorium which I assume it is(I can’t read the caption), there were decorative murals/paintings, which started near the top of both sides of the curveture of the outline of the stage. I’m not sure how to describe or the terminology for this feature. The paintings were in panels and ran all the way across the top of the outline of the stage. On my visit, one of the panels had come unattached and had fallen. The Fitzgerald’s had the fallen piece stored to the side of the stage. If I recall correctly, they said these pieces were badly damaged with little hope of restoration.

After going through the lobby area, there was a reception area before entering the auditorium. To the left, was a very wide staircase with a beautiful wood hand rail. This staircase led to the 2nd level and I suppose the first balcony. On our visit, this staircase was partially lit and was how we were shown to the Fitzgerald’s office which was in a big room over top of the ticket booth area. There may have been an identical staircase to the right. If there was, I don’t remember it because it was not lit and we didn’t climb it.

As I said in the previous posts, there was little electricity in the building. Extension cords were everywhere, even nailed to the walls near where the ceiling intersects.

On my visit to the theater, there were roman looking columns on the stage, similar or the same as shown in the newspaper picture. Since the Fitzgerald’s mentioned they rented the stage for rehearsal’s, I assumed the column’s were props for a theater troupe who was rehearsing.