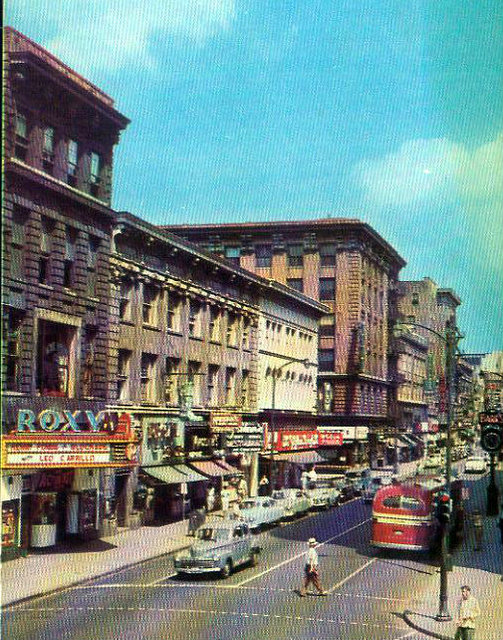 This little Art Deco-style movie house on downtown Granby Street opened April 4, 1938. It was still open in 1957, but closed down long ago.

The Roxy Theatre is located at 205 Granby Street and it seated 432 people.

Do you have anymore info on weather or not it still is running or closed. Or if it is for sale ………

I think this is somewhere around Tidewater Community College. It would be great if this theatre was renovated back to a performing arts facility. Maybe Bobby Wright could do it?!! I did a map quest search on the address and it’s at the corner of Granby Street and City Hall Avenue in downtown Norfolk. I think it’s the Federal Place section of downtown.

It would be fabulous if this place was renovated back to a theater so the downtown Norfolk Granby theater district really could be happening with the Premiere, The Norva, the Wells, and the Roxy! Uptown a ways is the Attucks… and even more uptown is the Rosna (that is currently a church) in Park Place on 35th Street, and the Riverview in the Colonial Place-Riverview neighborhood in Norfolk.

It seems as though the Roxy theatre structure was demoslished sometime around when Norfolk built the Federal Building at the corner of City Hall and Granby because the address for the Roxy is the exact address for the same block and side of the street that the Norfolk Federal Building is located. This is only one of many theatres downtown that have fallen to the wrecking ball. At the turn of the 20th century, though Norfolk then did not have such a good, clean reputation, there were lots of “variety theatres” located within a very small vacinty downtown, though I use the term “variety” very loosely as it relates to the probable entertainment that would have been offered to sailors and seamen in a (then) seedy navytown (Norfolk has changed for the better since then) during the early 1900s.

The building the Roxy was located in is still there but has been renovated into retail space. The Federal building sits where the Monticello hotel once sat.

From Norfolk a vintage postcard view of the Roxy Theater.

The Roxy Theatre is on this map of Norfolk’s business district from circa 1950.

The Saturday, April 9, 1938 issue of The Film Daily listed the Roxy Theatre in Norfolk as a new house, opened on April 4. The item listed the architect as Ben Speigel, but it might have been a typo for Spiegel. Internet searches reveal no other references to an architect of either name, though.