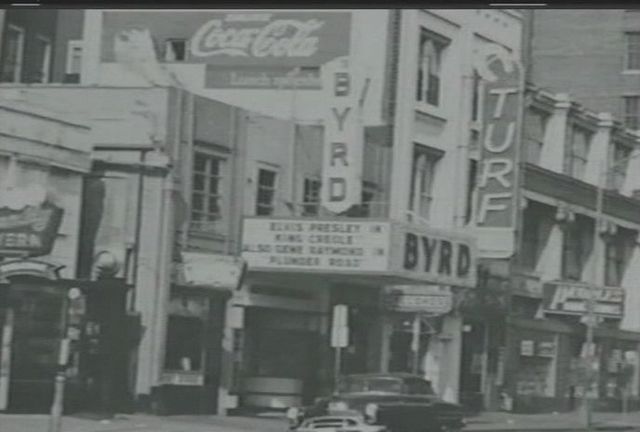 This was a small theater on City Hall Avenue, east of and next to the Monticello Arcade. In the 1940’s and 1950’s it showed 1930’s and 40’s era Westerns, usually a double feature. As part of the building, there was a very narrow hot dog stand fronting on the street. The theater was closed around 1970 and was demolished.

The Byrd is listed as part of the Hofheimer chain in the 1967 IMPA, along with the Suburban and Boulevard in Norfolk.

The Byrd was still in operation as late as 1970.

If memory serves … The Byrd Theater was downtown next to the Monticello Arcade and had the reputation as the “pervert theater” since young boys (usually sailors) could make some money servicing older gay men. They also showed really good horror double bills but after seeing THE LAST MAN ON EARTH and ATOM-AGE VAMPIRE (both are fun movies but not great movies) there I decided against ever going there again. Mom and Dad were right! The action in the auditorium was scarier than what was going on the screen. AS an adult (in the late 1970s and early 1980s) I went to The World Theater on Hollywood Boulevard (in Hollywood, CA) and it had a similarly nasty reputation (mostly for fist fights) but I was older then and less easily frightened.