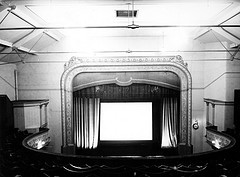 The Palace Electric Theatre was opened on 3rd November 1910. It had been designed by Tamworth based architectural firm Clason & Fidler. Variety acts appeared on the stage, as well as films presented on the screen. It was renovated in 1915, and became the Palace Cinema.

I am not sure what use (if any) the ‘old’ Palace Cinema had after closing. The site (together with the New Palace Cinema) is today part of the Ankerside Shopping Centre, built in 1976.