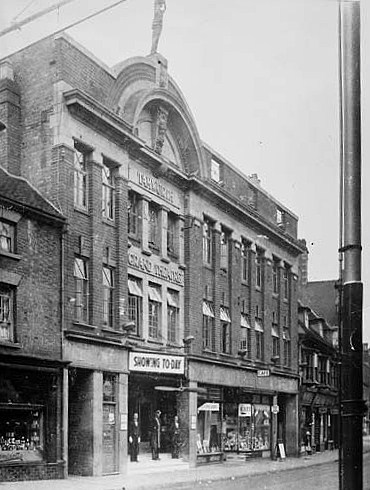 The Grand Theatre was opened on 19th May 1915, with seating provided for 500 in the orchestra stalls and 200 in the circle. The proscenium was 18 feet wide, and there were dressing rooms under the stage. The exterior of the building was in red brick with terracotta finishes and had a statue of Venus on top of the facade. The theatre had a cafe, which was very popular. It was built both for films and live stage performances, and was owned by Charles H. Dent, Jr. By the mid-1930’s it was owned by Tamworth Theatres Ltd.

The Grand Cinema was closed on 4th October 1958 with Peter Cushing in “Dracula” and “There is Always a Price Tag”. It was later demolished and replaced by a building containing three shop units, with offices above.

This page contains some additional history regarding and memories of the Grand Theatre in Tamworth.