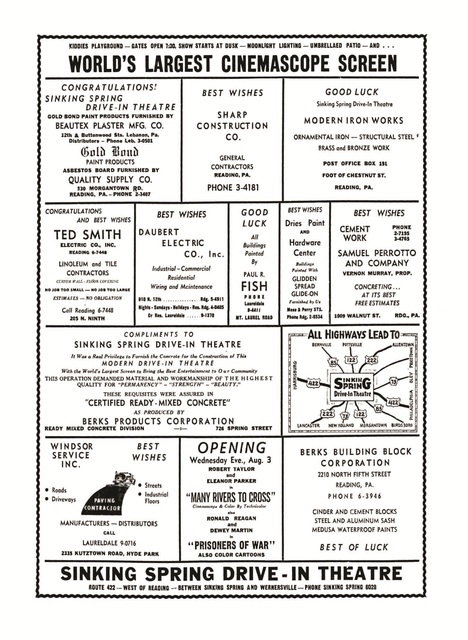 Opened on August 1, 1955 with Robert Taylor in “Many Rivers to Cross” & Ronald Reagan in “Prisoners of War”. Soon after opening it was sold to Fox Theatres of Reading, PA (which also operated the Reading Drive-In and the Mt. Penn Drive-In).

The Sinking Spring Drive-In was a first class operation with a 60 foot high by 120 foot wide screen on an elevated grassy knoll. Located on the south side of Route 422 traffic driving eastbound on Route 422 from Wernersville could see the screen for nearly a half a mile away.

The original screen tower was enclosed with some sort of masonite that covered the screen. Eventually the masonite on the tower disintegrated and the inside of the tower became a large pidgeon coop filed with pidgeon droppings. The screen tower was redone in the late-1960’s and learning for the mistake it was not enclosed.

There was a patio between the projection room and the concession stand where there were dances, contests and outdoor seating for the movies. The projection room featured Century projectors with magnetic sound heads.

The whole Central Pennsylvania midstate area has a lots of underground limestone and many areas suffer from recurring large sinkholes and underground springs. Thus the name Sinking Spring. The Sinking Spring Drive-In suffered as a result of this condition because a few years after the theatre opened a large sinkhole developed in the right rear edge corner of the lot (as you would face the screen) which completely swallowed the 40 foot right corner light pole which had been designed to illuminate the right exitway. This light pole vanished and was never seen again.

The obituary for Richard “Dick” Fox in the Reading Eagle implied that the Fox Theatres chain started with the Sinking Spring in 1957. “It was fate that brought Dick to Reading, where he built one of the largest independent movie theater empires and raised a family. Dick was living in Buffalo, N.Y., and drove a delivery truck for his father-in-law, Leo Katz, who had concession and drive-in movie theater businesses. In 1957, Dick jumped at the opportunity to run the Sinking Spring Drive-In.”