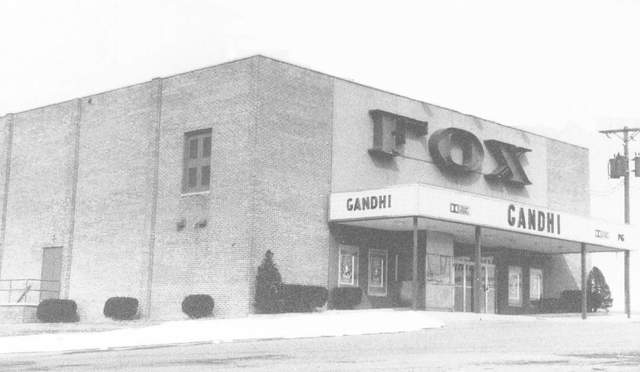 The theatre closed in 1988. Any further information on the Fox North Theatre would be appreciated.

If I recall correctly the chief projectionist at the Fox was Red Gift. The Fox Theatre was built and operated by Fox Theatres of Reading PA.

At that time Fox Theatres of Reading was a weak sister in the Reading market. The Reading market was considered by the distributors at that time to be part of the Philadelphia territory and thus Fox was competing for product with the Colonial (Stanley Warner), the Embassy (Fabian), the Astor (William Goldman) and later the Eric (Sameric). All of these major chains had a large presence in Philadelphia and product was often split and pictures were often ‘blocked booked’ based upon a chain’s control of what was happening in Philadelphia. Shince Fox Theatres of Reading did not have any venues in Philadelphia they often struggled to get pictures for the Fox in Reading despite being a premium 70MM house.

I remember at one time the Fox was reduced to playing Deep Throat in 1972 for lack of product. Although the Fox did play Star Wars for over a year, it was then unable to secure “Empire Strikes Back” which played across the street on one side of the Eric bowling alley twin in mono sound while the 70MM Fox played some third rate piece of junk in 35mm. According to what we were told at the time Empire had been block booked into all of the Sameric theatres in the Philadelphia territory which is why the Fox could not get Empire.

Despite being a premiere 70MM house the

If I recall correctly the original manager of the Fox was Paul Angstadt who later became mayor of Reading.

You are right, it was Paul Angstadt. The Fox was Dick Fox’s first movie house. Prior to that it was a drive-in chain consisting of the Reading Drive-In (where I worked for several years), the Sinking Spring Drive-In and the Mount Penn Drive-In, all in Berks County, plus the Deer Lake Drive-In in Schuylkill County. If I remember right, after leaving the Fox chain, Paul Angstadt operated the Strand in Hamburg, PA.

Also, the address and map at the top are way off. The Fox was located in the Muhlenberg Shopping Center on the 5th Street Highway (Rt.222), just north of Reading.

After leaving Fox Theatres, Paul Angstadt who had been general manager of all of the Fox theatres,formed a partnership with myself, and we operated 13 theatres in eastern Pennsylvania under the name Angstadt and Wolfe Theatres, Inc.

Neither Paul nor myself ever operated the Strand Theatre in Hamburg. One of the theatres that we did operate, which Paul currently owns and operates is the Strand Twin Theatre in Kutztown.

I stand corrected Mr. Wolfe, and my apologies for not remembering your name as Paul’s partner. Of course I would not question your information. I had the wrong Strand in mind. I might add that while I was an employee of the Reading Drive-In, Dick Fox did throw the best Christmas parties I’ve ever attended.