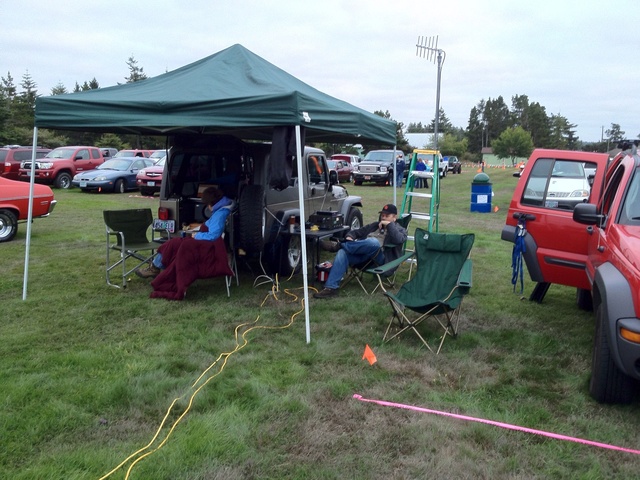 The Rhododendron Drive-In was opened on April 30, 1953 with Audie Murphy in “Duel at Silver Creek” & Lex Barker in “Tarzan’s Savage Fury”. It was operated by M.E. Ritter Jr. It was closed at the end of the 1979 season.

Construction for the Rhody began January 1953. With a planned opening of March 15th, (rather optimistic for the time of year and coastal weather) At the time the drive-in was located north of Florence on Hwy. 101, the entrance was on 15th Street. The lot itself was almost 7 acres. 3 separate exits off 15th, 17th & 18th Streets. The snack bar was painted with Flamingo pink, chartreuse & Waterford green colors & large picture windows on the front. The menu included: hot dogs, popcorn, soda, candy, ice cream plus coffee and hot cocoa. The screen tower measured 60 by 60 feet. The booth was equipped with Motiograph projectors & Microphonic sound.

The closure of the Rhody drive-in came at the end of the 1979 season, when owner Don Hicks was unable to obtain a new long term lease with the city. There was about 7 to 10 thousand dollars needed for repairs and improvements to keep it going. “The town is losing a valuable asset in entertainment. The people would like to have it. I know, but I’m not going to fight it.” Don Hicks

Thanks hispeed. I spent 3 hours at the Florence library, wasn’t too hard to find the opening & closing dates. The weekly newspaper at the time was the Siuslaw Oar, now Siuslaw Times. There was no staff photographer, so only a few print articles to choose from in ‘53. It appears there were at least 3 different owners, the Ritters, who owned the Florence/Harbor hardtop. Sometime in the 60’s, Len Swain & Lloyd Claver owned it. They also owned the Reedsport theaters then. Mr. Claver has ties to the Roxy in Coquille in 1940. And finally, Don Hicks.

Good luck in your hunt for picures…Randy

A more accurate address for this theater is now 1501 Airport Rd, Florence, OR 97439. This points to the Boys and Girls Club. The ball fields north of this address is where the drive in stood.

Why the name Rhododendron?

David, Wild Rhododendrons flourish in the area, even surrounding the drive-in, and now Miller Park. The city hosts an annual Rhododendron Festival each May, when the flowers are in full bloom. I attended the Rhododendron Elementary school while growing up here in the 60’s.