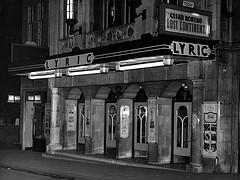 Located in the Northamptonshire town of Wellingborough. The Lyric Cinema was opened on 14th December 1936 with Edmund Lowe in “Seven Sinners” and Richard Dix in “The Devil’s Squadron”. The Lyric Cinema was equipped with a Compton 2Manual/5Ranks organ, which had an illuminated console on a lift, and was opened by organist Neville Turner. Seating was provided in stalls and circle levels. The proscenium was 40 feet wide, the fully equipped stage was 20 feet deep and there were fifteen dressing rooms. The cinema also had a cafe for the convenience of its patrons.

The Lyric Cinema staged its first live presentation on 11th January 1937, when the pantomime “Aladdin” was staged for a two week run. The Lyric Cinema was taken over by the Mayfair Circuit in 1941, and in around 1942, they became part of the Associated British Cinemas(ABC) chain.

The ABC was closed on 9th April 1969 with Tommy Steele in “The Happiest Millionaire”. The building was leased to the Leeds based Star Cinemas chain, and they immediately converted it into a Star Bingo Club. This closed on 26th April 1975, and the building was demolished three weeks in the middle of May 1975. The site became part of the new Arndale shopping centre, now known as the Swansgate Centre.

The Compton organ was removed to Wellingborough Technical Grammar School (later Weavers School). It has subsequently, around 2008, been removed to Bilston Town Hall, restored and modified and use for dance music.

Lyric – Wellingborough. As can be seen from the 1946 photo the projection room was vast in size. It stretched the entire width of the cinema and had rewind / battery / rectifier / workshop / office / toilet & rest room all on the one floor. There were three entrances to the projection room (1) up the fire escape from street level which went past the Managers Office window. (2) through the disused Cafe / Restaurant (3) through a door in the projection room wall at the back circle in the gangway behind the last row of seats. Nothing surprised us more if a patron should suddenly appear in the secondary sound proof door expecting to find the toilet! There were 4 (recorded) Midland Console broadcasts: two each by Trevor Willetts and Reginald Porter Brown. The organ was eventually removed and was installed in Weavers Road School for many years, devoid of its decorative glass surrounds. It now resides and is a feature in Bilston Town Hall. The Manager during my time there was Mr Ron Crabb. A great and approachable Manager, and one who was very publicity minded, but who stood no nonsense from staff or unruly patrons. There was also a visit from the popular BBC ‘DOWN YOUR WAY’ team, who had responded to a letter from me indicating that I had never ever heard of a projectionist being interviewed on it. Myself and the Manager were both interviewed by the programme presenter Franklin Engelmann. I was 21 years of age and the youngest Chief Projectionist on the ABC circuit at that time. Back stage there was two floors of dressing rooms and in earlier days it is clear that stage presentations of one sort or another were presented. In later years with the installation of the cinemascope screen, it could still be used for this purpose, although the Strand Electric board was not duplicated, and therefore had to be operated from the projection room. Apart from the two Ross projectors, there was a Stelmar spotlight and a single Robert Rigby slide lantern. In the very early days the adjacent Car Park actually had a Petrol Pump and an attendant to operate it from a brick hut at the entrance. The pump was eventually removed and the hut became a place to store Staff bicycles! The cinema also had another unique facility which permitted hundreds of patrons to queue for the next performance in inclement weather. This indoor facility stretched the length of the building down the left hand car park side and was accessed through curtains at the back right hand side of the entrance foyer …which also was the access for the Ladies Toilet! The entrance to the ‘queuing ramp’ (as it was known) can be seen in the historic architect shot of the entrance foyer, as can also be seen the decorative lanterns that initially provided the foyer illumination. It was of course, the projectionists’ job to lamp and wash all the glasswork for these, as can be seen in one of the photos. When the cinema was redecorated these wall lanterns were all removed and replaced with a central modern chandelier as can be seen in the colour shot. Patrons entered through sets of double doors from the street and obtained tickets from a small central pay box, and from there walked into the foyer and made their way to the stalls at the right hand side, or the circle by the stairs to the left.
I was sorry when it came time for me to leave the Lyric as it was a fun place to work in those days, but I’d applied for, and gained the position of Chief Electrician/Projectionist at the newly built ABC Blackpool….but that’s another story.

ABC LYRIC. OPENING NIGHT PROGRAMME NOTES. PAGE 16 confirms the story that a Car Park did have an attendant, and although it is not mentioned I have seen a photo which shows a petrol pump adjacent to the Car Park hut.
The same page also indicates the provision of the huge internal queuing area, and the Lounge area which encircled the upper area of the foyer. SEE PAGE 6. This has large semi-curtained plate windows which screened off the view of those waiting for the start of the next performance, from those eating in the Restaurant & vice versa! Deep and comfortable velour covered settee’s were set into alcoves: the whole area being carpeted. PAGE 13. The cinema was equipped with a very effective Plenum air conditioning plant and during very hot weather it was normal to advertise that it was cooler inside! PAGE 14. This would appear to be a standard Compton organ console shot that I have seen in other ABC programmes, even if the console that appeared looked nothing like the photo! During my time at the Lyric I actually traced the organist Neville Turner, by this time playing Hammond organ entertaining patrons in a Yarmouth Sea-Front Sun Lounge.