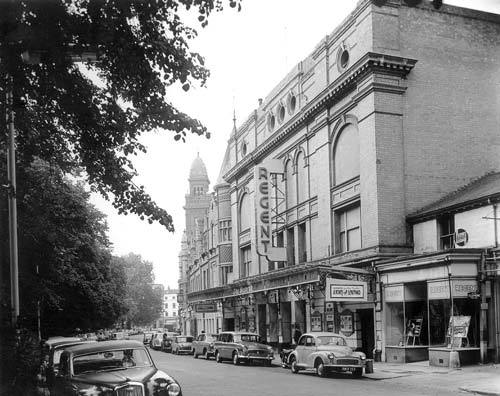 Originally built in 1883 as the Opera House, designed by Osborne & Reeding, with theatre architect C.J. Phipps. By 1908, it had been re-named Theatre Royal, and was presenting Bioscope films as part of the programme. There was some modernisation and redecoration carried out in September 1909. More imprevements were carried out in December 1912.

In 1932, the Theatre Royal was in use as a repertory and variety theatre. It was closed in late-1934 and was rebuilt internally in an Art Deco style. The enlarged building was re-opened on 3rd August 1935 as the Regent Cinema with “Fred Astaire in "The Gay Divorcee”. There was now a 2Manual/5Ranks Compton organ with an illuminated console which was opened by organist John E. Francis. The Regent Cinema was operated by Paramount Picture Theatre Ltd.

In November 1936, it was purchased by Leon Salberg & Sydney Clift, listed as being owned by Stratford on Avon Picture House Co. a subsiduary company of Cinema Accessories, which was the Clifton Cinemas chain. The Regent Cinema operated as both cinema and live theatre presenting variety and live shows on its stage.

The Regent Cinema was closed on 15th December 1962 with Anne Bancroft in “The Miracle Worker” and Francis Matthews in “Lamp in Assassin Mews”. It was converted into a bingo club, which opened on 28th December 1962, however this was not successful and was soon closed.

The building was taken over by an adjacent garage, and by 1984, it was laying derelict and was later demolished.