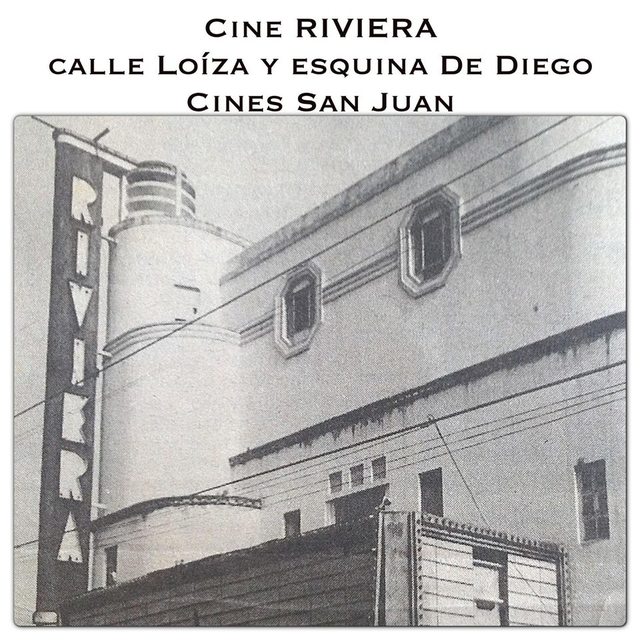 A beautiful Art Deco style theater built in the 1930’s by the Armentero family. It was considered one of the most beautiful and elegant movie theaters in Puerto Rico. Besides being a showcase for the best movies, it was also a performing arts theater.

In the 1960’s it became a "double feature" movie house. The last film shown was a "Saturday Night Fever"-"Grease" double bill in 1979.

It remained closed for several years and was torn down in 2001 to create parking space for a nearby hotel.

It was across the street from the old Shannon’s Pub on Loiza Street.

For a photo of the Riviera theater a few weeks prior to demolition visit: www.rivieratheater.blogspot.com

are there any more pics of the Riviera?

By mid ‘60’s, the lady who not only sold, but also tore your ticket in half while making change was Dona Meri. Kids admission was a quarter, double feature. Another quarter covered popcorn and a coke. That is, if Dona Meri was keen toyour attempt to sneak through the back screen door. Musty, dusty, no seats, and too close to focus the mirror image. And figuring out the character of the vast rips of screen was part of the fun. Upstairs bas relief profiles identified the proper restrooms in the balcony lobby.

Best architecture and design of all cinemas, Metro included.

(Continued) The vice-squad enjoyed surprise raids to inculcate shame. They took your name and let you go. Out to the street full of people you didn’t want to acknowledge. The show only closed for Good Friday when they invariably projected La Muerte y Pasion de Nuestro Senor Jesucristo to an absent audience. Honestly. I’m Curious Yellow, following Pasolini’s classics, 120 Days of Sodom, Caligula and VCR’s did away with that variety. The Rialto, next to Old San Juan’s La Barandilla today sells Whoppers.

(Continued) I also recall Cinerama’s premiere with 3 panoramic overlapping projectors imaging a curved wide screen. The movie was How the West was Won.
An afterthought. The Matienzo, catering to Tin-Tan, Mexican costumed superheros and their detective genre, had an incredible once in a lifetime performance. Bill Haley and the Comets. I swear it. I was there. I was 7. I won a pair of skates in an entry raffle. The wheels didn’t even roll. It was Haley’s turn.

Seguriola: As I have said in others post, I was in the film exhibition business in PR during the 1960s. I worked for both Commonwealth Theaters, later Wometco, and MGM. DoÃ±a Mary — not Meri — was the widow of Pedro Armenteros, the owner of both the Riviera and the Delicias on Fernandez Juncos Ave. and Calle Parque, later sold or leased and was renamed the Rex. MGM wanted to lease and remodel the Riviera but Da. Mary refused because she had promised the husband that the Riviera would always be “in the family”. Her son tried to convince her to accept the MGM offer to no avail. MGM then leased the Music Hall from the Circuito Llamas. (A bit of history: Rafael Ramos Cobian decided to retire from the theater business and went into politics and baseball and bought the San Juan baseball team and leased Teatros CobiÃ¡n to Victor Carrady and Jack Odell, who operated the independent Lorraine. He changed his mind and leased the Circuito Llamas and competed against his own theaters. He remodeled the Oriente adjacent to the Matienzo, renamed it the Music Hall and introduced CinemaScope to PR. When the Llamas leased expired he joined forces with Carrady and Odell and formed Commonwealth Theaters, starting a remodeling and building project that resulted in the Puerto Rico, Radio City/Excelsior, Cinerama and others.) The first or one of the first MGM bookings at the Music Hall was a Greta Garbo festival and an operetta festival. Both made a ton of money. The idea of the festivals was actually given to MGM from a Commonwealth executive. We were friendly competitors. As for Cinerama, the projectors were not panoramic, they were 35mm which projected a taller image than regular 35mm and the image did not overlap on the screen, they were side by side and filled the big Cinerama screen. The film strips were silent, the sound was in a separate projector that ran a 35mm magnetic film with the soundtrack. Finally, perhaps if Da. Mary had accepted the MGM offer, the Riviera may still be standing operated by Caribbean Cinemas, who took over the Metro. Maybe it would have been twined, but it would probably be still standing and showing films.

AGR, Thanks for filling in a void in my Cine Riviera memories. Actually, I remember DoÃ±a Mary behind the ticket booth, although my attendance dates to the early sixties. I wasn’t yet 8 and always paid child’s fare. Couldn’t get a better deal for a double feature. (Except maybe at the Grand). Both needed a good cleaning. The restrooms were identified by bas relief portraits of a gentleman’s top hat and, am guessing, a lady’s bonnet. Never went there.
Just a note, I did see “How the West Was Won” at the Cinerama. They had 3 projectors going on at the same time to cover the widescreen. The effect was not quite perfected and at times made me queazy.
The Metro, Paramount and Metropol often had 2 story high cardboard silhouettes of blockbuster major stars towering the theatres' marquees. The Metropolitan went all out in out with the star packed classic “D-Day”. Inside, the closed curtains, built up suspense. And no kid looked forward to the “intermission”.
Maybe another day you will dedicate a line or 2 to puerto rican audiences' innate reflex to any abrupt unexpected break during a film’s projection. The mere lack of focus was immediately met with a varied spectrum of spontaneous whistles and “foco, foco” public alerts.

Hola Segurola. The only break I remember was at the Cinerama during the run of HTWWW. One of the film strips broke and the show was stopped immediately of course. When a break happened in a 3-strip Cinerama film, black film was spliced into the film to keep the 3 strips in sync. When the film was resumed all you saw was a quick black spot on the screen. We always had dress rehearsals for roadshow openings. On the afternoon dress rehearsal for Chitty Chitty Bang Bang, when the film started, the music on the titles sequence was the music of the Sound of Music titles (the same lab did the prints of both films), and the Chitty Chitty music and dialogue started right after the director’s credit. I went back to the office and called UA to get another first reel from NY, picked up my copy of the soundtrack LP and played it on the theater’s record player the titles music under the main title on the evening premiere performance. Next day we had a new first reel via Pan Am express. On screen focus, we had good projectionists at the first run houses and they also had to be licensed electricians. We always had a few focus complaints on Doris Day films. Her close ups were filmed through gauze in front of the camera lens in order to hide her freckles. We always had a hard time explaining this to the customers. Another thing was that when most of the films began to be shot in color to compete with color TV, some customers refused to see black and white films. “Â¿No es en colores? Entonces no entro”. And we are talking about The Train, 7 Days in May, Manchurian Candidate and other top films. I don’t remember that happening with Longest Day. In the late 60’s we stopped showing old “Pasiones” — except in “la isla” were we even showed old silent ones. Yes, you read it right, silent. In San Juan and other cities we played 10 Commandments, Ben-Hur and the like. Sweet Charity opened on Easter week at Plaza 1 and we had 10 Commandments at 2. On Easter Sunday morning, the Plaza manager called me and told me Plaza 1 was empty and at Plaza 2 people were fighting to get in and had broken the box office glass. I told him to switch films right away and put Commandments on Plaza 1. I then called the Universal Branch Manager and told him what I had done. He said OK, did not blame me and would notify NY next day. I also called CobiÃ¡n and Carrady and told them. When I was a kid, I lived on Calle Cordero so I used to go to the San JosÃ©, later Grand, a lot. Every time I saw the doorman changing the marquee, I always thought I wanted to change a theater marquee. Well, my wish came true at Plaza 1 and 2. On opening day I told the workers that I wanted to put up the marquee letters. Got up on the scaffold and did it. At new theaters openings we — including the top people like CobiÃ¡n and Carrady — went to the theater and worked until the last minute cleaning, nailing the last piece of carpet, etc. At the Plaza opening, since I knew I would not have time to go home and change, I took my tux with me and washed and shaved in the men’s room. Thank God I had a good cologne and deodorant. Hope did not bore you and other CT contributors. See ya.