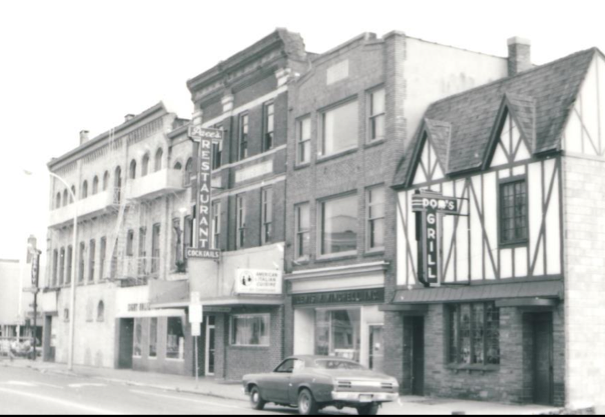 The Temple Theatre was operating as a movie theatre by 1912. By 1933, it was part of the Schine Circuit, and continued to operated until at least 1950.

The Cortland Elks Lodge is currently at this address, but I am not sure if it is the theatre building.

The Temple Theatre closed on July1, 1952. Shortly after that the Pace brother (Ethan, Dom and Tony) who operated Dom’s Grill, the Tudor style building at the far right of the photo, bought the building. In 1964, the family began demolition of the interior. I remember my dad and uncles bringing down the balcony. At that time the street front of the building was 3 floors. The building was turned into a restaurant that opened its doors in November of 1966 and was operated as a restaurant by the family until Dec. 19, 1979 when it was sold to the local Elks Lodge who had lost their building to a fire the previous year. This is the correct building. The entrance on the left is the original theatre entrance location. The original stairs to the balcony second floor still exist. The Pace family installed a second floor these stairs led to. In tribute to the old theatre, the Pace family commissioned a mural in cartoon form of all the Hollywood actors from film history along the wall from the front entrance to the balcony staircase. The mural was used on the placemats for the dining room for years where customers could guess who the stars depicted were. The mural still exists. In 1985 a severe wind storm blew down the walls of the main room dining room and second floor banquet hall. The Elks chose not to rebuild the second floor, only the first floor dining room and removed the third floor at the street side of the building. They did find the old theatre doors in the basement and had them refinished and installed in their original location. The Elks continue to run their club from the location. The main dining area is the location of the room that was the original screening room of the theatre.

From this street view of the front of the building, second floor level you can see how the building was divided. The wider section on the right from street view has 3 windows. A business called “The Cortland Press” housed that side. The Temple Theatre side, at the left only had and entrance and ticket booth. That is where the front entrance is located plus the small diagonal window. There was a small marquee over this section. The Shine State Theatre located on Main St. used the displays for movie posters even after the my family bought the building. In exchange their children got to see Saturday afternoon features for free. It was a nice deal.

The Temple Theatre was advertised in the Cortland Standard at least as early as 1912. It was one of two theaters in Cortland, the other being the Cortland Theatre, which was most likely the former Cortland Opera House, which was in operation by 1900.

In 1919, the Temple was operated by D. S. Burnham who, according to the July 12 issue of The Billboard, had just taken over the Cortland Theatre from the Dillon Brothers.

The Temple was being advertised in the local newspaper as Schine’s Temple Theatre by April, 1933, but the Schine name had not yet appeared in the ads for the house in March, 1932.