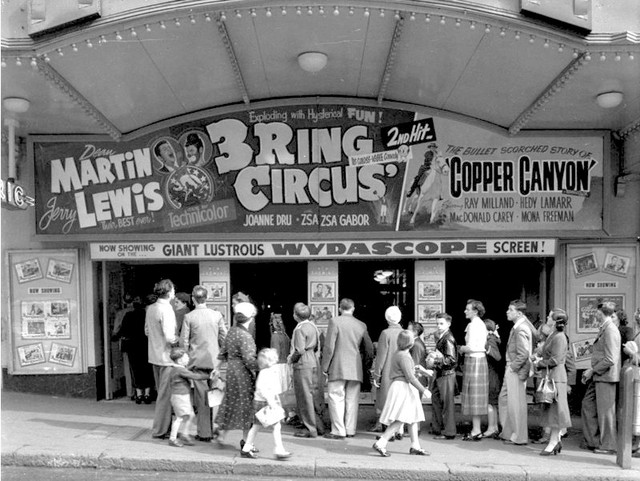 Located in Sydney city centre on George Street, between Valentine Street and Ultimo Road. The Lyric Theatre was opened by Canadian born J.D. Williams on 31st March 1911. The rather plain auditorium had decoration mainly on the front of the two circles. Seating provided for 865 in the stalls, 400 in the dress circle and 650 in the gallery. It was one of the tallest theatres in Sydney but Greater Union, who soon took over operations, were to wish it was one of the widest. When it was equipped for sound films, the acoustics were improved by adding panels of softwood lattice to the side-walls. The old fashioned decor was later replaced with sharply angled Art Deco style and the proscenium simplified. For most of its life it was slightly out of what became the city’s two theatre districts, and ran double bill revivals.

In the 1950’s they ran all of the Universal horrors – “Frankenstein”, “Dracula”, “The Wolfman”, “The Mummy” and “ The Invisible Man” series to packed houses.

As the photo for “3 Ring Circus” boasts, the Lyric Theatre showed films in Wydascope. Greater Union had hardly any CinemaScope films so they invented Wydascope which was just masking regular films to look wide.

On 23rd June 1960, it became the Forum Theatre, opening with “Porgy and Bess”. A false ceiling now hid the third tier of seats in the gallery, which became unused. 70mm equipment was installed but the screen was still too small to show that off properly. GU had the rights to Samuel Bronston’s films and so the Forum Theatre was the default epic house presenting films such as “55 Days At Peking”.

A mixed-use office, retail and residential building named Capitol Terrace has been built on the site.

Poor old forum it finished up being a bit of a dump.Last shot was to fit out and run sensorround films . Kit was acouple of big power amps stacked near the main sound rac,these amps powered tall sperker colums in the cinema triggered by a signal on the mono optical sound track the amps would send out huge room shaking frequency to ad to the experience,[this worked great on the Battle of Midway film with guns going off]problem was it was only one frequency so not much scope for development.It died , I think only 3 movies were made with type of sound track.

Remember seeing Battlestar Galactica there in the late 70’s in all its “SENSOROUND” glory. By that stage it was pretty unloved but still had good crowds. I think the “Sensorround” movies were Earthquake (which I also saw), Battle of Midway and, as mentioned, Battlestar Galactica. HUGE speakers at the front on either side of the screen made the place shake!

The Forum theatre was down the road from the University of Technology (or NSW Institute of Technology as it then was). Dave’s Encore cinema operated there for a while in the early 80s, after having moved from another old cinema in the city. I remember seeing Dr Strangelove there in 1980, as part of their “Offical Silly Day” which was an all day screening of classic comedies.