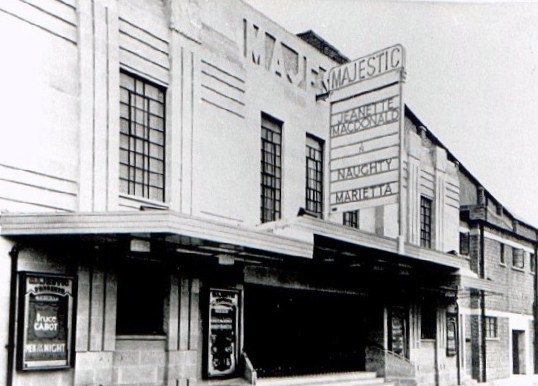 Located in Reigate, Surrey on Bell Street & what is today the corner of Bancroft Road which was named after the Bancroft family who built the cinema. The new Majestic Cinema was built to the right of the already existing Hippodrome Cinema which was also operated by the Bancroft family in partnership with the Shipman & King circuit.

The Majestic Cinema was opened in November 1935. Seating was provided in stalls and circle levels. There was a large stage and a 3Manual/7Ranks Christie organ was installed with an illuminated console. The organ was opened by organist Reginald New. The cinema also boasted a cafe for the convenience of its patrons.

The Shipman & King circuit was taken over by EMI in the 1970’s, and they later became part of the ABC chain. The stage was used quite often in the 1970’s and 1980’s with one-night concerts by pop stars.

The Majestic Cinema was closed on 11th December 1982 and was demolished for redevelopment.