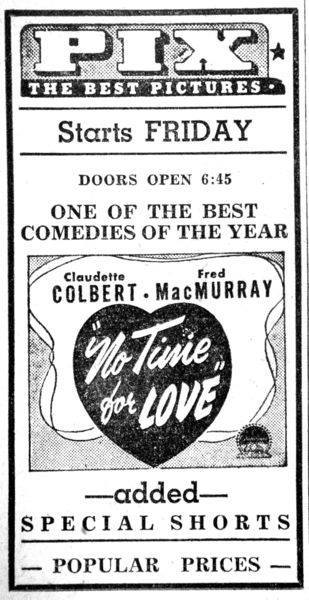 The Lewiston Morning Tribune announced on March 10, 1940 the start of excavation for the 1,000-seat Pix Theatre. Mary Pulver was the builder and operator of the $75,000 building designed by Seattle architect A.M. Larson. Newspaper ads show that it opened in late-1940.

Pulver was a former partner with Ike Binnard, the builder of the Liberty Theatre in Lewiston, Idaho, which was built in 1921. Binnard died in 1933 and Pulver bought controlling interest. According to the Tribune, Mary, who passed on in 1950, became one of the best-known theater operators in the West.

In August of 1948 The Tribune noted that Mary Pulver was planning a $3,000 remodeling of the building, which included a ten-foot extension to the back of the building, an enlarged lobby and numerous upgrades. At the time Mrs. Pulver’s theater holdings included the Liberty, Granada, Roxy and Autovue in the sister city of Lewiston, Idaho.

The Tribune said that the Pix Theatre closed in March of 1956 and since 1960 it has been home to Asotin County Gerontology Council.