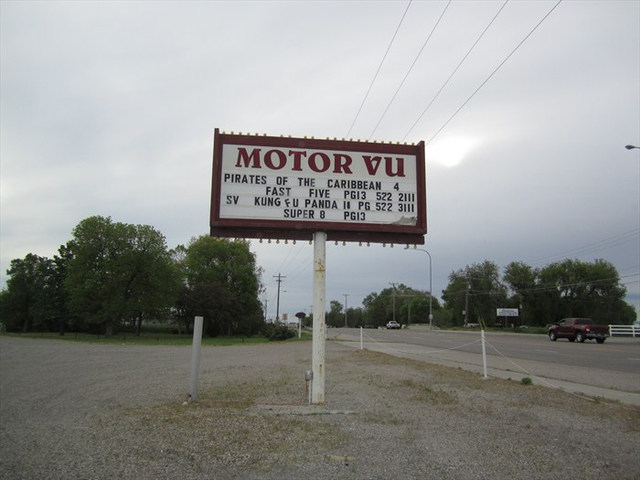 The Idaho Falls Motor Vu Drive-In and Sky Vu Drive-In, owned by the same party, are located about four miles apart on opposite sides of the center of the city.

Archives of the Idaho Falls Post Register say that Hugo Jorgensen built the 612-car Motor-Vu Drive-In in 1947. Later listings in the International Motion Picture Almanac gave the car count as 500 with other accounts listing even fewer spaces as the years went by.

By 1951 Jorgensen had sold his interest to his partner, Ed Moran, in order to concentrate on his theatres in Rigby, Idaho and Garland, Utah. During the 1951 season Sunday services were held at the drive-in, with owner Moran serving as the sound engineer.

For the 1960 season the Motor Vu Drive-In and the Sky Vu Drive-In announced their first price increase in 12 years. Adults: 75c. Children: 20c. In April of 1961 long-time Southern Idaho exhibitors DeMordaunt and Drennen purchased the theater. In August of 1988, the Motor Vu Drive-In changed hands again when Essaness Theatres of Chicago bought the theatre from Theatre Operators Inc. of Bozeman, Montana. Also included in the deal were the local Centre Theatre and Rio Theater, and theatres in other small Idaho towns.

It was reopened in 2020 screening revival & classic movies.

This theatre is currently open. The Sky Vu is closed. They are trying to raise funds for a digital projector.

It’s the first week of May 2017, and the Motor Vu web site still shows Closed for the Season. No updates on Facebook or Twitter since August 2016. The GoFundMe campaign is still getting small donations, but it’s currently less than 1% funded.

Speaking on the Idaho Falls' local TV station, owner Marcia Leonard made it official yesterday. The Motor Vu will not open for the 2017 season.

She maintains that selling the Sky Vu, still on the market with no buyers, would provide enough cash to buy a digital projector. Heaven forbid that it would be considered a cost of doing business. “We could (take out a loan), but because we are a seasonal business, I don’t want to go into debt,” Leonard said.

That TV station link includes a video so you can see what the Motor Vu looks like these days. Leonard says she hopes to reopen one day, and I hope she’s right. Until then, I’ve marked the Motor Vu as Closed in Carload.com’s database.

it might not reopen because i have found a website that has pictures of a crane standing next to the outer fence of the drive-in which was demolished so although it isn’t confirmed i think it’s a safe bet that in the near future it will be demolished.

that would be sad because in 2016 the grand vu drive-in in twin falls was demolished!

Boxoffice, April 1984: “Theatre Operators Inc., headquartered in Bozeman, Montana has acquired the theatre properties of D and D Enterprises, which consists of the Holiday and the Westwood in Rexburg, Idaho, the Rio, Center and Motor-Vu Drive In in Idaho Falls, the Nuart in Blackfoot, Idaho and the Roxy in Salmon, Idaho.”

Motor Vu in Idaho Falls reopened in 2020 and plans to continue operating in 2021. They showed older films like Back to the Future and also used it for events such as high school graduation ceremonies.