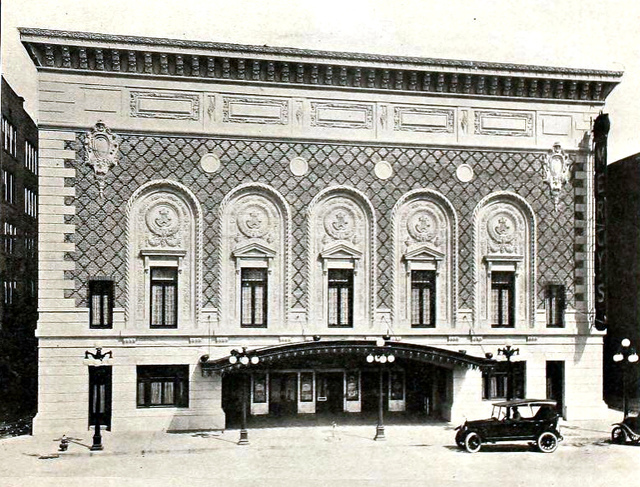 When Frederick Mercy, Sr. realized that downtown Yakima was without a large vaudeville house, he decided that he would be the one to have it built; not just any vaudeville theatre, but the grandest and most luxurious that the city had ever seen. Mercy hired the house architect of the Pantages circuit, B. Marcus Priteca, as well as muralist Tony Heinsbergen, who also worked on many Pantages theatres, to design his theatre.

When it opened on April 5, 1920, the Mercy Theatre was among the most spectacular theatres in Washington State, and the largest at that time in the state. It opened to packed houses, from all over the Yakima area, filling the original 2,000 seat capacity.

Designed as an Italian Renaissance palazzo on the outside, the interior was a combination of High Renaissance and Classical elements, giving an air of opulence and grandeur to the theatre. Heinsbergen’s graceful murals decorated the ceiling and walls of the main auditorium. A year after the Mercy Theatre opened, it was renamed the Capitol Theatre.

As vaudeville went into decline in the 1930’s, the Capitol Theatre switched over to a movies only policy, which remained until the early-1970’s, when the theatre was shuttered. By then, the once-grand theatre had definitely seen better days, and was a shadow of its former self. It was at this time that the Mercy family, which still owned the Capitol Theatre, opted to sell it off. To prevent the historic but decrepit theatre from being turned into one more parking lot, it was acquired by the City of Yakima in 1975, after being prompted by concerned citizens and a group called the Allied Arts Council. Also at this time, the Capitol Theatre was placed on the National Register of Historic Places.

Not long after the sale to the city was finalized, an electrical short started a fire which quickly spread throughout the Capitol Theatre, all but gutting Yakima’s former showplace.

However, even before the smoke cleared, talk of restoring the old palace began, and though it would be costly and time-consuming, talk soon became reality as funds were raised amazingly quickly to rebuild the theatre, of which little remained but its blackened shell.

Because of the severe damage, the Capitol Theatre was almost entirely recreated anew, and what we see today is a loving new version of the old theatre, almost identical to the 1920 original. Changes included a new basement, which housed offices and a meeting room called the Robertson Room, today rented out for weddings and other special events, and all-new murals decorating the main auditorium’s ceiling, by the same man who painted the originals over half a century earlier, Tony Heinsbergen, who came out of retirement in his early-1980’s, to create his masterpiece.

Priteca’s original ornamentation was recreated using fiberglass molds, or where the decor was entirely lost, molds were made from several other Priteca theaters of the same vintage and style.

In late-1978, less than three years after the Capitol Theatre was ravaged by fire, the theatre had its second grand-opening ceremony, complete with the Governor of Washington and other officials on hand, and the legendary Bob Hope on stage to entertain a packed house.

Today, as in its early days, the Capitol Theatre remains a source of civic pride, and is a centerpiece of Yakima’s cultural and historic legacy. Not only does it host stage productions and concerts, but is only the home of the Yakima Symphony Orchestra.

Bryan,
While searching for information on theatres I discovered the Cinema
Treasures website and our Yakima Capitol Theatre. To complete the history, the restoration architect was William E. Paddock of the firm Paddock and Hollingbery P.S. and the theatre was originally part of the Pantages chain. I was with the firm during it’s restoration.

The Mercy Theatre opened on 5th April 1920 with a Shubert production of the operetta “Maytime”.

This theater was also known as the State at some point. Great photos at View link

There are several photos of the Capitol on this page. The first shows the previous incarnation as the Loew’s State:
http://snipurl.com/vwy7

I have a link to a color photo of the Capitol Theatre. At the bottom of the page is the photo. When you click on the photo you get a closer view of the theatre.
View link

Another A.K.A LOEWS STATE.

I heard the story of how Bob Hope came to be the MC for the grand opening. In the Vaudeville Era, great entertainers would play the houses in Seattle and Spokane. Travel expenses were high and players often skipped town without paying their hotel bills. The sheriff met them the next trip. Yakima heard of this and offered free room and board if they played the CAPITOL. A minister and his wife provided lodging.

This caught on and Yakima hosted many fine shows while the players earned some travel money. When Bob Hope got the call he remembered Yakima and was happy to do the honors.