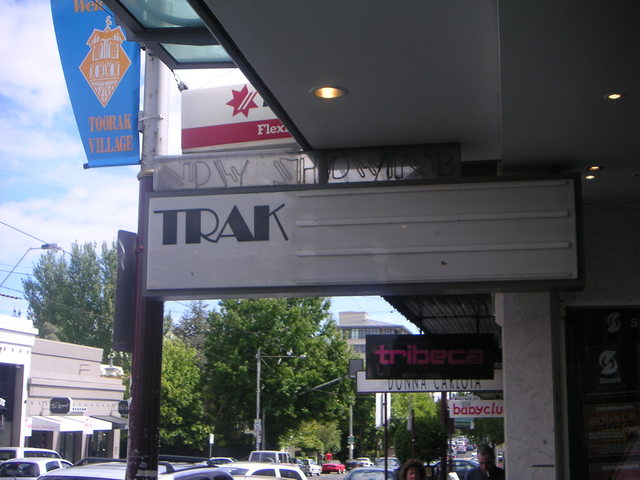 Located in the up-market Toorak district of Melbourne. Originally on this site was the magnificent Village Theatre (1936-1958) which has its own page on Cinema Treasures. After its demolition the small Trak Shopping Arcade was built, which contained the Trak Cinema that opened on 3rd October 1969 with Jack Lemmon in “The April Fools”.

It operated as an art house cinema until closing in late-2000. It briefly re-opened in December 2001 for a Jewish Film Festival. It was converted into Silvers nightclub.

It was operated by Village Cinemas for only a few short years until the early 1980s, then independently owned and operated until the mid 1990s when it joined the Palace Cinemas chain. In the late 1980s, a feasibility study was conducted to ascertain whether Trak could expand to a second screen in the adjacent Silvers Nightclub site which was located in sublevel 1 behind the existing bio box and would have allowed for the sharing of same, but this didn’t proceed due to cost and engineering concerns. As nearby multiplex theatres Como cinemas & Village Jam Factory opened, competition became incredibly tough for Trak. However, Trak’s unique mix of art house genre film, Hitchcock festivals, Rogers & Hammerstein, opera on screen, ladies' day curated movie lunches and possibly the world’s longest run of the Kevin Kline/Linda Ronstadt “Pirates of Penzance” movie, interspersed with the occasional commercial runs, such as “Jurassic Park”, gave it an edge for some years. Its enormous screen allowed for impressive presentation of large format product, notably re-runs of “2001:A Space Odyssey” in 70mm and latterly Warren Miller’s ski films that were presented there annually. Trak’s small stage atop a ramp, ahead of the screen allowed the cinema to repurpose from time to time as a conference venue, and clients such as Nicholas and Sandoz would present regular pharmaceutical launches there.

The interior design of the theatre was modern, in line with the era in which it was built. Orange plastic vertical wall sconces were interspersed on the soft beech-coloured wooden walls and lit the auditorium between sessions. Low backed, black vinyl seats featured in two sections (seating was stepped, however a low wall divided the back section from the rest of the theatre, adjacent to where the entry tunnels emerged into the auditorium). When the screen was not in use, it was covered by a shimmering silver-coloured sequin curtain. The foyer’s colour scheme was initially vibrant Village Cinemas' red and black with thick timber panels used on the stairway as a handrail. When the shopping arcade above modernised, a circular stairway was erected on a steel pole in the Trak’s foyer atrium (which only extended from Silver’s level -1 to level 1, not down to the cinema). At this time all of the handrails in the centre including the cinema’s were replaced with glass facias and aluminium tubing railing, re-modernising the foyer’s appearance. New carpets were laid on the stairs at that time and the foyer was repainted soft pink throughout.

The foyer had two enormous glass display cases which formed the southern wall of the foyer with the auditorium entry doors in the middle. The cases were used to display posters of upcoming movies and also housed a historic projector and movie reels with a spool of film spilling from them as a display piece.

The foyer in the early 1980s sometimes featured live performance by a small string orchestra, but usually music was piped from the bio box instead. A small cafe operated at the eastern end of the foyer selling cheesecake and brewed coffee (iced coffee in summer) before sessions. This was in addition to the candy bar located at the western end of the foyer offering the standard cinema fair of popcorn, choctops (ice cream) and confectionery.

The cinema screen sat immediately under Toorak Road, and at quiet moments of a movie often a tram could be heard trundling overhead on their steel rails. Being under Toorak Road had a further hazard: Whenever there was a severe downpour and storm water drains and pipes filled to capacity, water would come tumbling from the ceiling and flood the auditorium (mostly after hours), leading to the carpets being replaced many times over the years.