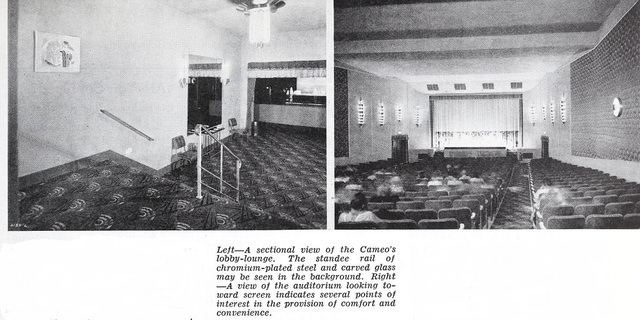 Replacing an earlier Cameo Theatre/Ritz Theatre at Park Street & Main Street. This Cameo Theater was opened April 29, 1939. It was closed in 1997.

GC, don’t bother.“Morini purchased the Cameo in September 2000 from Southeast resident Denise Quinn for $195,000”. Morini, who was also the broker at the time, rejected higher offers from buyers and groups who had plans to do great things with it for the community, but never submitted them to the owner Denise Quinn, so he could purchase it himself at a lower price. Like all the other property he owns in town, he is just sitting on it until he can profit enough from it. He’s the one renting the tiny apts to large groups of day laborers that you see hanging around on the streets in town.

If you want to contact Morini, or want to tell him what you think of the abandoned theater or ask where the $100K that was supposed to go to the theater went, his website and email are here:http://robertmorini.houlihanlawrence.com/

Here is an article about the Cameo from Boxoffice magazine in November 1939:
http://tinyurl.com/ydhov4h

My first encounter with the Cameo was when it was one glorious screen. My Father took me to see both STAR WARS and RAIDERS OF THE LOST ARK on that single screen. Later when it became two screens I went there and saw all three BACK TO THE FUTURE films, ROCKY IV, MIDNIGHT RUN, HOWARD THE DUCK, STAR TREK IV: THE VOYAGE HOME, RAIN MAN, INDIANA JONES AND THE LAST CRUSADE, DICK TRACY, DEAD POETS SOCIETY and SCENT OF A WOMAN. It’s so very sad to see it sit dormant. I fear it will be torn down, just like the Plaza in Scarsdale, where I’m from originally.

– The Cameo Theater, Putnam County’s first movie house, was built in 1939 and served the community until 1997. In 2000, the darkened theater was purchased by a local developer to forestall its demolition. His original intent was to renovate the 6,500-square foot building and lease it to an experienced theater operator, but he was unable to find a suitable tenant. The interior of the structure has deteriorated to the point where rehabilitation may be cost-prohibitive.

The Putnam County Courier of Thursday, April 29, 1939, said that the new Cameo Theatre in Brewster would open at eight o'clock the following night.

I have been researching potential grants from the National Trust for Historic Preservation. This building can be saved. The question is, are there enough interested parties in joining an effort to restore this building. I do not know the gentleman who owns the building or what his intentions are. But the building is useless as his. Can anyone share the exact history of the transaction? He purchased the building for 195K then was granted 100K and did nothing with it? Please share.

Did you know the Cameo is the first movies theater in Putnam County? It is. The Cameo is great.

The more names, faces, and stories we get, the better.

ChrisJNJ not sure if you’re a local, but I have become increasingly aware of the importance of this place. If you have any connection or know people who do, please direct them to the page and have them share their memories of Putnam County’s oldest theater.

@filmbuffNY I’m interested in that Morini story. Where can I read more?