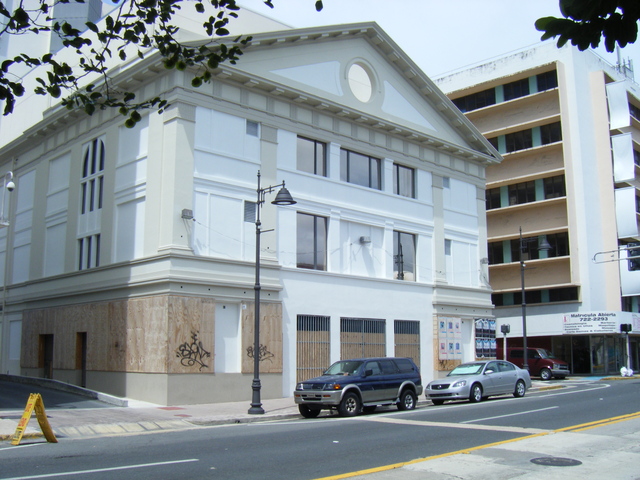 Along with the Metro Theatre and the Riviera Theatre, this was one of the most architecturally interesting Santurce theaters. It was built in 1922 as the Olimpo Theatre and was remodeled in the early-1930’s in Art Deco style. Renamed the Paramount Theatre, it was a prestigious first run movie theater.

In the 1960’s while many movie theaters became part of chains, the Paramount remained independent. This meant that it didn’t play many of the major movies, but it did play some great B-grade films, including "Texas Chainsaw Massacre" and "Gumball Rally", among others.

In the mid-1970’s it was bought by United Artists Theaters and was turned into a triplex. It remained a well attended theater. But in the 1980’s, UA seemed to lose interest in the theater and it became a rundown, depressing place. Attendance became very low, until it was closed in 1999.

As of December 2008, the Paramount Theatre was, unfortunately, demolished, and all that remained of the theater was the facade.

The Olimpo theater was renamed the Paramount after a hurricane in the 1930’s destroyed the marquee and Paramount Pictures loaned Rafael Ramos CobiÃ¡n the money to rebuild the marquee on the condition the theater be renamed the Paramount. When CobiÃ¡n divorced his first wife, Rita, he gave her the Paramount and the Tres Banderas, Imperial and Borinquen in Barrio Obrero as part of their divorce settlement. CobiÃ¡n and Commonwealth Theaters leased the Paramount from her for $2000 a week, and Rita’s second husband, Jorge, operated the concession stand. The Paramount was the top money making cinema in PR, grossing an average of $12,000 a week and sometimes as much as $15,000 and $16,000 a week, a lot of money in the 1960’s. More than once, CobiÃ¡n told me that one of his biggest mistakes was giving the Paramount to his first wife as part of the divorce settlement. After Commonwealth was sold to Wometco, Rita took the theater back and was managed and booked by Junior CobiÃ¡n, a former VP at Commonwealth. Eventually Junior leased it to United Artists when UA opened the Cinema 150. UA tripled it and as we all know it was eventually closed and is now in the process of renovation. By the way, how is the renovation coming along?

Really well. Everything is just about finished. Last I went by they were placing the air conditioner boxes on the roof.

Good, thanks Davsot. Hope it’s finished by the time I go to PR for Thanksgiving and Xmas.

Courtesy of CT’s JosÃ© Mendez, a 1955 documentary on Puerto Rico. The Paramount can be seen about 1:35 min. into the picture. Could not tell what was playing.

Here is the link I could not find months ago which shows the Paramount in disrepair prior to reconstruction.

If you clic on “Ver fotos” you will see other PR projects such the University Theater and the Teatro Yaguez.

Just came back from San Juan and the Paramount looks terrific, almost complete. The side walls were reconstructed following the original design and they added picture windows where they meet the facade. The stage house is huge and there is a building behind it, for offices I guess.
Andy Roura

Paramount photo of how it looks now:

Re Paramount photo, you may have to click to photo #5 if it does not come up right away.

I am doing a documentary about Cine Roosevelt. If you have any memorabilia or information about Teatros Cobian, the original owners of the cinema, and someone from the Cobian family I might interview please contact me at

It is with great sadness that I inform you the passing the Andres Roura, a great contributor to these pages about movie theaters in Puerto Rico. I had the privilege of meeting Andres thanks to this site and our long lunch conversations about movies and movie theaters are things I will always treasure. And I will miss his weekly e-mails telling me about movies on TCM. Que en paz descanses.