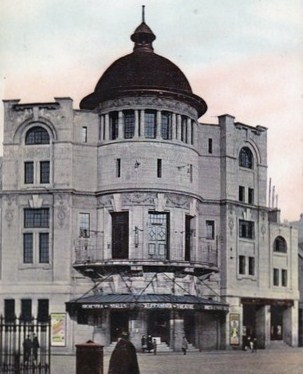 Located in Greenock, Renfrewshire at the corner of West Blackhall Street & Grey Place. The Alexandra Theatre was opened on 10th August 1905. It was designed by local Greenock architects Boston, Menzies & Morton and was a replacement theatre for the town’s Theatre Royal, almost adjacent, which had closed in 1905 as a live theatre, to become the Hippodrome Theatre presenting variety shows.

Seating was provided for 1,900 in orchestra stalls, dress circle and balcony levels, and there were 10 boxes. The interior was decorated in a French Renaissance style.

The Alexandra Theatre was re-named King’s Theatre in 1910. It was converted into a full-time cinema by Sydney Friedman in 1928, the conversion taking four months to complete. It re-opened on 6th August 1928 with Sybil Thorndike in “Dawn”. It was equipped for ‘talkies’ in January 1929.

Occasional stage shows returned for a while during World War II. The King’s Theatre was taken over by the Rank Organisation on 3rd October 1955, and the interior was ‘modernised’ to the plans of architect Lennox Paterson, by removing the balcony, boxes, stage and dressing rooms to create a modern 1,500-seat cinema within the shell of the old building. It re-opened as the Odeon on 16th January 1956.

The Odeon was closed in October 1969, after a Compusory Purchase Order was placed to straighten the road. It was demolished in April 1973, and in 2012, the site remains an empty plot of land, used for car parking.

This webpage has some additional photos; the interior shot will expand if clicked upon.