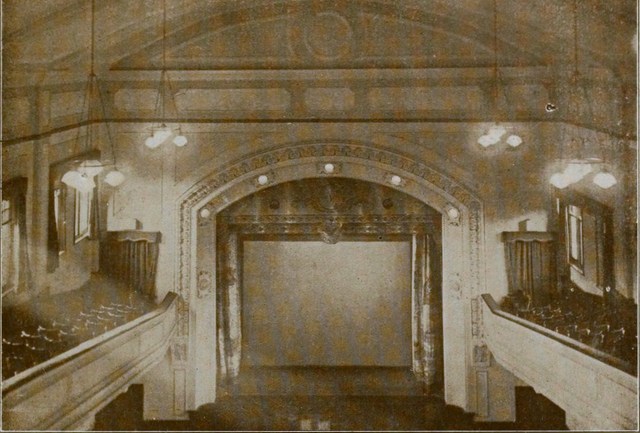 Located on the corner of Back Scotland Road & Russell Street, Nelson, Lancashire. The Majestic Theatre was opened in 1910. It was rebuilt in 1926 to the plans of Nelson based architect Richard Jaques. The Majestic Theatre had a 26 feet wide proscenium and an 18 feet deep stage. Seating was provided in stalls, mezzanine and balcony levels, the balcony having side slips which extended toward the proscenium and contained rows of paired seats. The projection box was located at the rear of the stalls.

By 1934, it was a full time cinema. It was closed on 8th July 1961. It was purchased by the Marsden Building Society, who demolished the building to build their headquarters on the site.

The site of the former Majestic is now (2014) that of the of the offices of the Marsden Building Society.

The demolition information is also incorrect, according to Mercia Cinema Society’s “Chronicles of Pendle’s Picture Palaces” which quotes an article in the local newspaper ‘The Nelson Leader’ of 30 June 1961.

Star Cinemas were to acquire local cinema chain Victory Theatres, but the Majestic was to be sold to the Marsden Building Society as the site for their new HQ (which it is; see Street View). The cinema closed on Saturday 8 July 1961 with Jerry Lewis in ‘Cinderfella’ and Bob Hope in ‘The Paleface’.

brian Haynes was the chief projectionist when the majestic closed he did a short stint at the palace cinema before emigrating to Australia,it feels strange for me walking into the marsden building society where the majestic once stood so much of nelson has gone down memory lane