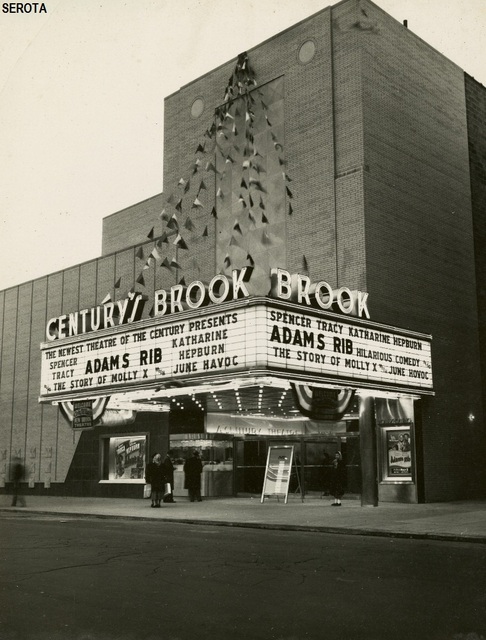 Opened on January 25, 1950 by Century Theaters chain, the Brook Theatre was, in a way, an early attempt at twinning. Although the theatre stood around the corner from the Marine Theatre, both shared the same boiler system. The Brook Theatre had a very streamlined interior and lasted longer than the Marine Theatre (which closed because of insurance problems), but it was run down at its end and closed in 1980, with a sign announcing that the theatre would open as a quad, which it never did. It still stands, albeit gutted, as an office building.

I went on an interview for an assistant manager position at the Brook. I had just graduated college and could not find a job. It was a depressing experience. There were several of us sitting in the back of the theater waiting to be interviewed (“American Graffiti” was showing at the time,) and the man who interviewed me told me that if I wanted the job I would have to shave my mustache off and go out and buy several new suits. Boy am I glad that I didn’t listen and made no attempt to go any further regarding that dead-end job.
Actually other than that, the Brook was a pretty nice theater. It was never all that crowded unless there was something big playing. I remember it drew huge crowds for “Rocky,” “Network” and “The Return of the Pink Panther.” I saw many films there including “On Her Majesty’s Secret Service,” “Clash of the Titans,” “The Deer Hunter,” “Straw Dogs,” “Zardoz,” etc. I used to pass this theater frequently. I can still remember passing by during Christmas season 1978 (I think,) and seeing the marquee stating “Gala Christmas Show” Charles Bronson in “Telefon."
As stated, this was a very nice theater with a balcony. However, due to the sparseness of the crowds, I was not surprised when it closed.

The buiding which was once the Brook Theatre is now available. Maybe someone once th rent or purchase the whole building & reopen the theatre. Below is a link of a picture of how the building currently looks. This picture was taken on 03/25/2010
http://www.atomictimetronics.com/brooktheatre.html

A photo of the lobby of the Brook Theatre was on the cover of Boxoffice of August 5, 1950.

The Brook had an unusual feature not shown in most photos of the marquee. The right side attraction board extended down past the front of the building and into the alley.

I always believed the Brook and Marine would last forever-Saw many a flick at the Brook-The one that sticks in my mind is “Rodan”-One of those crazy imports from Japan-I was there with the very lovely
Carol. (Don’t remember the movie too much)LOL.

Loved loved loved this theater…very sad to see what happened to it but it was inevitable. Huge place…and I remember the smoking section(!) Went to St Thomas Aquinas in the 70s and 80s. They used to show movies on Wednesday afternoons because we had half-days. Saw The Empire Strikes Back there…4 times!!

I also went to St. Thomas Aquinas school, but in the early sixties. I recall the school taking us to the Brook to see Disney’s ‘Fantasia’ and we didn’t like it at all, but we were made to stay in the theatre until the time that school would be out. In 1962 my friend Tommy Foley and I were going to see a kid friendly film at the Marine theatre and walked over to the Brook to see what was playing and saw the posters for ‘Dr. No’, which we saw instead. My mother was stunned to find that her eight year old son had seen the new James Bond movie, which I am sure was not approved by the Legion of Decency in the Catholic ‘Tablet’ newspaper. I lived on Schenectady Avenue and Avenue M, it was wonderful.

I saw my first movie at the Brook, the 1960 (or 61) re-issue of Pinocchio. I remembered how big the screen was and how fancy the theater was. I was 5 years old.