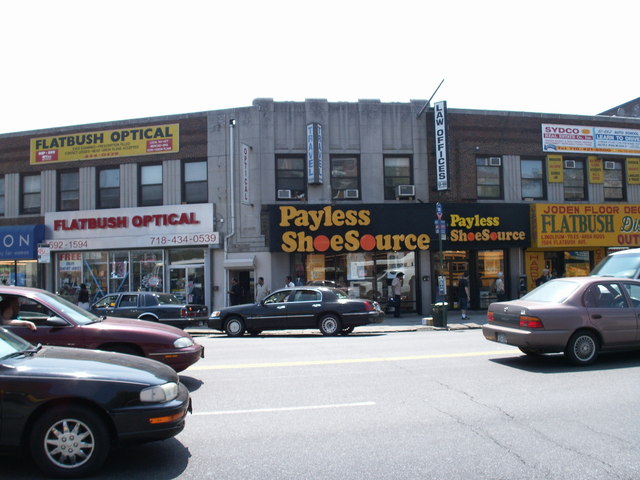 Opened in 1938, this little Art Deco style house has a raised back section of seats that served as kind of a balcony.

In the 1960’s, this was a great place to see sub-run double features. When Century Theaters closed the Rialto Theatre, it moved that theater’s first-run policy here.

But as the neighborhood changed, the theater’s business waned, and the fate of this small theater was inevitable. (Oddly the local of the projectionists' union used to occupy the offices above the theater.) It was closed in 1984.

Both they and the theater no longer inhabit the building.

My express bus used to pass the College theater every day when it turned onto Flatbush Avenue. (It also passed the closed Rialto, now a Church and came within 2 blocks of the still-closed, though not demolished, Loews Kings.) I was only in this theater twice with my wife to see Olivia Newton-John in “Xanadu” and “The Amityville Horror.” I remember absolutely nothing distinctive about this theater and although I am now out of Brooklyn, I am totally unsurprised that it has closed up.

Sometime in the early 80s, the then President of Brooklyn College and a team from the Brooklyn Center for the Performing Arts visited the closed theatre in the hopes that it might be acquired by CUNY to take some of the performance load off the Center’s four theatre complex. Their theatres were having a hard time servicing all the events that they hosted every year. A fifth theatre would be able to ease the bottle necks they often ran into.

This theatre would have been perfect as it is directly adjacent half a block from the large U shape building and can be seen in the aerial view to the left of the theatre building on the next corner. All at that meeting, including President Hess, agreed the theatre would be a perfect addition to the Performing Arts Center.

Unfortunately CUNY in its wisdom would not purchase the property and now, decades later when the Center is pushed beyond its physical limits, CUNY and the City are forced to spend between 75,and by the time it is done, 85 million dollars do build a theatre exactly the same size of the College Theatre. Ironically, the PAC is designed with faux art-deco elements and so the College Theatre would have been a perfect match.

Gary C. is mistaken; the theatre had some wonderful and yes very distinctive art-deco elements including the lighting fixtures and structural lines made with aluminum plating. The stand-alone external box office itself is a very unique structural design indicative of that period and almost never seen today. Many times we can look directly at things and not realize how special they are.

The College Theatre didn’t close because it was unremarkable, it closed, just like so many others, because of the slump caused by commencement of the video age. Also because Century Theatres by this time had become nothing but a real estate company with little interest in operating theatre; they were making profits by selling off it property holdings before dissolving their east coast operations. They were letting all of their theatre simply run into the ground. An independent operator who knew (and loved) the theatre business could easily have made this or any of the other Century Theatres operate profitably.

Why didn’t anyone else take up the gauntlet on these theatres with great locations? Because Century had in its sale contract an encumber that stated the property could not be used as a movie theatre. This lovely, modest theatre should not be faulted because of the stupidity of greedy corporate types.

I remember seeing a number of AIP releases during my 1970s childhood. FOOD OF THE GODS, THE LITTLE GIRL WHO LIVES DOWN THE LANE and THE AMITYVILLE HORROR as well as a few Universal movies in the 1980s.

I saw many movies here, the Flatbush Junction was a major hub and also a dividing line of neighborhoods. As the demographics changed it got dangerous there and no one went anymore so it closed. Sad.

Cinema Treasures shows a total of 395 theaters in Brooklyn only 21 of which are open. Regardless of neighborhoods that’s the way things are.

What do you mean by “only 21 of which are open”? Operating specifically as cinemas, or including other purposes such as performing arts or churches? Yesterday’s “movie clock” in the NY Daily News listed nine, nearly all multiplexes.

My brother and I used to walk to this theater in the early 1960’s. We saw many movies there, mostly in the summer. The last movie I remember seeing there was Father Goose in 1964. I also remember one time being told to leave by the matron after our movie was over. I think a ‘mature audiences’ movie (not an adult movie, just one not suitable for kids) was going to start and we had to leave.