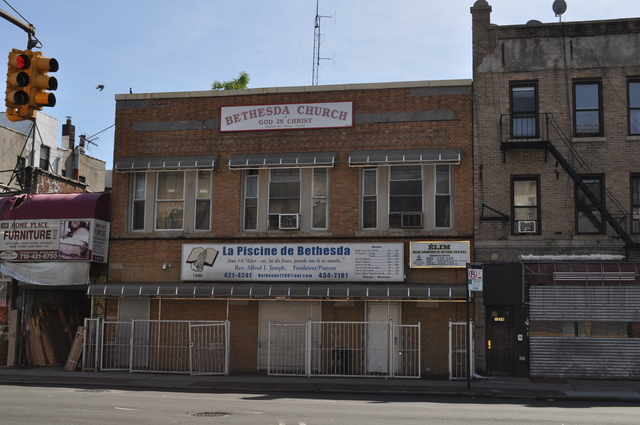 During the transition from nickleodeons to screen projection, movies began to be shown on screen in the nickleodeons, in small stores, in lodge halls, in the open air at night and as an added attraction in vaudeville theatres.

The first dedicated movie theatres were usually small and not too comfortable or elegant. They soon disappeared with the appearance of larger, more comfortable new theatres with a more polished presentation, whether these were new construction or conversion of legit and vaudeville houses.

The Midwout Theatre in Brooklyn was one such movie theatre that had a short life. It was located at the junction of Bedford Avenue and Flatbush Avenue with Foster Avenue. This would be in the Flatbush section of Brooklyn but close on the border of Midwood Terrace or Midwood section. The boundaries of these entities were vague and shifting over time as real estate developers came up with marketing names in the old towns of Flatlands and Flatbush. As the Midwout Theatre was located on the northeast of this junction it was in Flatbush. If it was southward on Flatbush Avenue to northside of ‘The Junction’ of Flatbush Avenue and Nostrand Avenue it would still be in Flatbush. Southwest on Bedford Avenue it would be in Midwood Terrace.

It opened in 1914 as the Alcazar Theatre and operated under this name until 1915. It was then renamed Midwout Theatre (aka Midwout Playhouse) and it operated until 1917. Midwout is a Dutch translation of Midwood. Its audience began to flow to the new, larger, plush Rialto Theatre a few blocks north on Flatbush Avenue and Cortelyou Road when it opened 1916. In 1917 until 1919, it operated as the Eureka Theatre. The new Farragut Theatre, a few blocks south on Flatbush Avenue Avenue killed it upon opening in 1919. The new Farragut Theatre replaced the old Farragut Hall, a wooden building used for public meetings, receptions, etc. before starting to show movies on a regular basis in 1911.

The Midwout Theatre had a further brief spell of operation as the Kenmore Theatre from 1919 until 1920. The building became the Flatbush Chevrolet dealership show room and garage in 1920. Today a furniture showroom operates from the building.

In the Brooklyn Eagle Newspaper edition dated 7th November 1915, this Midwood Theatre is listed as operating as the Midwout Theater under new management and with an entire change of policy. (Midwout is the old Dutch spelling for Midwood meaning middle of the wood). The location is given as Foster, Bedford and Flatbush Avenues.

The last sentence on the opening text for this theatre is incorrect as the other Midwood Theatre located at 1953 Avenue J was already advertising in the Brooklyn Eagle in November 1915. It originally opened in 1913 and was later enlarged to the current building which is seen today.

Wrong building, the one to the left is the former Midwout Theatre, you can see the ironwork for the small vertical sign it had.