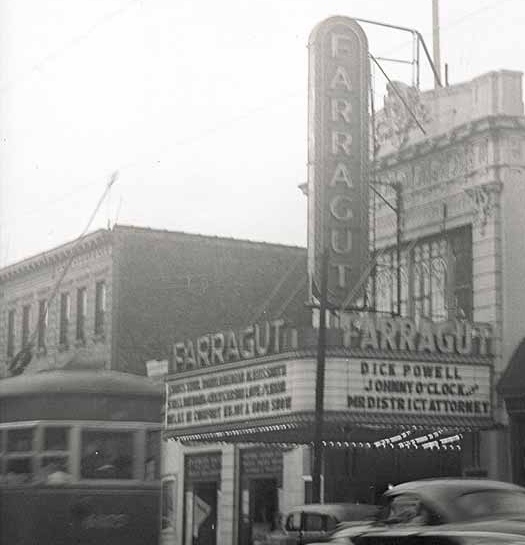 Built on Flatbush Avenue in Brooklyn in 1919, it was a large neighborhood vaudeville house with silent movies. The Farragut Theatre was opened on April 22, 1920 with Geraldine Farrar in “The Woman and the Puppet”. An Austin 3 manual / 16 rank theatre organ was installed. It was served by two passing trolley lines on Flatbush and Rogers Avenues. Converted to talkies, it became part of the Century Theaters circuit in the 1930’s.

The last live stage performance was in 1953 when a magic act was presented along with the showing of the movie “Houdini”. It was operated by Century until 1955 when it went dark for about six months before reopening as part of the Springer Circuit which was formed to operate other closed Brookyn houses. The marquee was painted along with the vertical, trim color going from red to bright yellow.

It closed circa 1959 and was reopened as a bowling alley which went bankrupt in 1963. It was then converted into a YMCA.

The alterations listed above were done by John and Drew Eberson.

Here is a photo taken on October 31,1943 by Ed Doyle. Note the work going on to repair trolley track requiring a special piece of temporary track work which allows Car traveling south to “jump over” to northbound track for a short distance so service can continue on Flatbush Avenue Car Line.
View link

When Century issued it’s movie Guides, the Farragut Theatre Building was listed as the point of origin. I seem to recall the editor as A.A. Hovell. There were the Brooklyn, Northern Queens and Eastern Queens-Long Island editions. Were Century headquarter also in this building? In later years they were headquartered in the Community Theatre Building and then, subsequently, in their own, free standing building on Verbena Avenue in Floral Park.

Around 1940 Century Circuit bought an office building in Manhattan for a HQ. Long time ago, I can’t recall details or if they ever moved in.
Here is another picture taken by Ed Doyle February 8, 1947 of snow storm and Farragut front and rear profile:
View link

Searched NYT database for detailed information about above posting.
January 30, 1942. Eight storey building at 132-136 W.43rd Street. The Century Circuit Inc. purchased from The Bank for Savings, a building,with tax valuation $350,000.00 dollars, for new executive headquarters. A projection room was planned along with other remodeling.

Odd that a company which, until many years later, was exclusively Brooklyn, Queens and Long Island should purchase Manhattan office space.

This location was near all the major Film Exchanges on the West Side and was where the big time action was at the time.

Presumably the A.H. Schwartz was the Schwartz who started the Century Circuit.

jflundy: Great old time pictures! Do you or anyone have a picture(s) when this theatre became “Kings Lanes” (bowling alley) later on? I spent a good deal of my youth there before it closed and became what it is now, a YMCA.