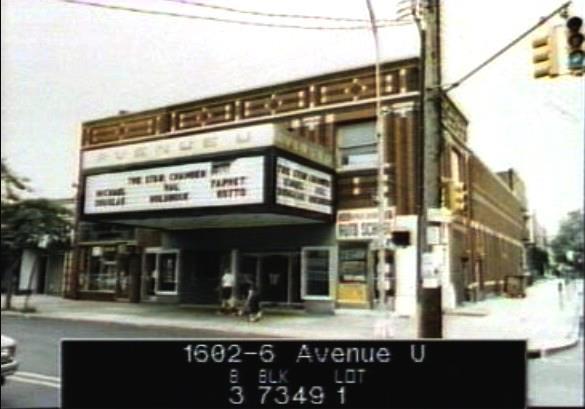 The Avenue U Theatre was a small neighborhood house which was operating by Rugoff & Becker by 1943. They were still the operators in 1950. In the late-1950’s it was best known for it large CinemaScope screen. At one time it was run by the Cinema 5 chain and was sub-run.

It was a first run house, and then it became a dollar theatre. In its twilight days, it had a twin theatre policy of seperate admissions for different movies, all shown in the same theatre.

It was gutted, the floor leveled and prepared for retail use. Yet the store was never rented and after sitting vacant for over a decade it was converted into a bank and retail use.

Address numbers do and can change sometimes!This might lead to some of the confusion in the Google maps.This is rare but it does happen.

This was a relatively small, average theater that usually had long lines throughout the 1970s due to its dollar admission. My parents used to go there a lot and it was quite popular due to its low admission price. I saw several films there throughout the 70s: Live and Let Die (for the second time,) The Deep, The Great Gatsby, The Legend of Hell House, etc. I think the last time my wife and I were there was to see Hannah and her Sisters in the early ‘80s. As stated this was basically a small, unattractive neighborhood theater with nothing really distinctive to remember it by.

The Avenue U in 1970. Battle of Britain and Buona Sera Mrs. Campbell are playing.

The vintage bus forces me to real;ize that the photo was taken over 40 yrs. ago. I remember when the new marquee was installed and the sense that the Rugoff chain was finally trying to spruce up the place.

i worked at the avenue u at about the same time that kirk doulas’s lonely are the brave made its debut. what was most intriguing to me was the theater’s basement (near the bathrooms. which were downstairs, too.) where i found promotional items like tiny red dice sent rolling on a spinning circular platform, encased under glass and activated by a plunger you pushed with your thumb, as well as illustrated ticket stubs for a presentation of king kong.

In late 78 it started playing Rocky Horror on Saturday nights at midnight to packed crowds. My friends and I did the stage show in costume once. What a blast!

The 1980 picture added to Photos

Photo added to gallery, from the 1949 NYC Tax photos.