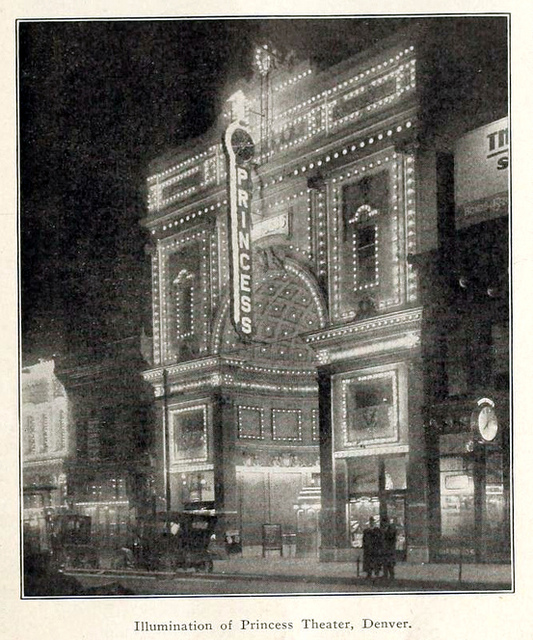 The Princess Theatre was built on ‘Theatre Row’, opening on October 11, 1910. In 1919, it was renamed Victory Theatre in honor of men who fought in World War I.

The Victory Theatre, at least in its early days, used elaborate signage to promote the films being shown. There are a number of images in the Denver Public Library digitized collection of the theater’s outer lobby showing these promotional advertisements. Here are links to three:

More images such as these can be viewed by inserting Victory Theater (not Theatre) in the search engine on this webpage.

The theater may have survived beyond 1951; here is a night photo of a Victory Theater in Denver operating as film/burlesque house in 1969 according to the information accompanying the photo.

A history of Denver movie houses in the July 15, 1916, issue of The Moving Picture World said that the Princess Theatre had opened on October 11, 1910. It was the first theater in Denver to have been built expressly to show movies.

A lawsuit involving the Princess Amusement Company and the architects of the theater, the F. E. Edbrooke Architect Company, was reported in the 1915 edition of the legal journal Pacific Reporter.

The October 19, 1912, issue of Electrical Review and Western Electrician (Google Books scan) had an article about exterior illumination of Denver theaters which included a photo of the Princess Theatre by night.

The Denver Public Library provides this early photo of the Princess Theatre. Enlarging the photo reveals the intricate detail of the facade, which I suspect was cast iron painted white rather than terra cotta or plaster.

Very nice links thanks for posting.

A card in the Denver Public Library’s History Index says that the Empress Theatre was renamed the Victory Theatre in 1937, so unless the original Victory was itself later reopened under another name, 1937 must have seen the end of it.

Comparing the 1935 picture of the Victory to the others that are dated prior, it is clear that at least as of 1935, the building was the same as the others though apparently that striking half-dome entry had been least partially filled in and a marquee installed. The move across the street to the Empress probably did occur around 1937.

The State is one of several early Denver houses still missing from Cinema Treasures. The 1925 opening was actually a re-opening under new name. Here is an earlier photo showing the same house when it was called the Strand. The Strand opened September 9, 1915, according to The Moving Picture World of January 1, 1916, which also noted that the new house had been built on the site of the first Isis Theatre. The State Theatre was demolished in 1953.

I have always been confused by the fact that when I worked at the Victory Theater in the mid-1960’s, the top of the proscenium had the words “Majestic Theater”. Can anybody clear up my confusion?

Denvercary: The theater you worked at became the New Victory Theatre in 1937, after the Victory Theatre this page is for either closed or changed its name (I haven’t yet discovered its fate.) The New Victory was built in 1907 as the Majestic Theatre, but was renamed the Empress Theatre a short time later. It was later called the Pantages and then the Center before becoming the New Victory.

The New Victory is one of several Denver houses that hasn’t been added to Cinema Treasures yet. I was hoping that someone who knew more about it would add it, but it looks like nobody is going to get around to it, so I should probably submit it myself.