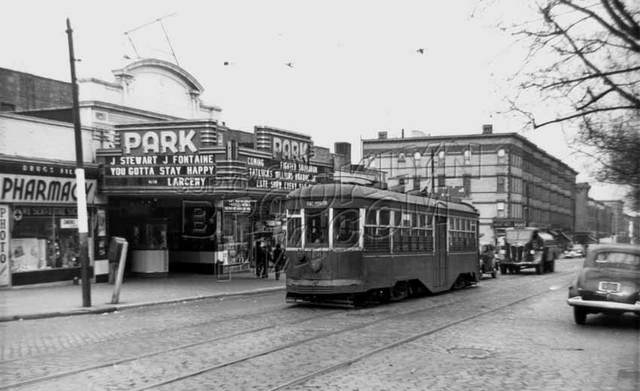 Located in the Sunset Park district, and built on the site of the Sunset Airdome(1914), the Park Theatre was opened in December 1915 by B.S. Moss. A 2 manual/6rank Wurlitzer organ was installed in September 1923. Closed in 1965, the old Park Theater on 5th Avenue is now a supermarket.

The Park Theater was where my Mom and dad went to as teenagers. It became a Bohacks supermarket in the late 60’s and then a Key Food in the 70’s. Everytime I go there I sneak off to the bathroom which maintains it’s movie theater style. It feels like you just steped into a Time warp. I grew up on 445-43rd street right down the block.

I am about to get some info about the theater, which I hope to share. The last movie shown was “Baby the Rain Must Fall” with Steve McQueen during the summer of 1965, the year my family move to Sunset Park.

In the 1920’s and early 1930’s the Park was considered a first class neighborhood theater. It was the first in Sunset Park/South Brooklyn area to put in mechanical air conditioning. It was not cheap to do this and this was in the depth of the Depression. It cost $25,000 in June of 1934 when job was completed. Back then a paper cost 2 or 3 cents, bread was 11 cents a loaf and coffee a nickel a cup with free refill. If you were rich you could by a new Dodge or Chevrolet for less than $800. That $25,000 was close to half a million in today dollars.

Air conditioning was a big deal in those days. No stores or homes in the area had it. Most people still had ice boxes not refrigerators and few had electric fans. This really helped the theater in attracting patrons from the competition in hot weather. To build the tip they ran a special 10 cent admission policy for all before 2PM on weekdays.

I remember seeing a double feature"Horror Hotel"& “Burn Witch Burn” at the Park. It was across from Sunset park. I use to have friends who lived on 45th St. and remember the Park very well.

When I went to Xaverian High in Bay Ridge and lived on 22nd Street (across the street from where I live now), I went to the Park to see Susan Hayward (formerly Edythe Marrener of Church Avenue) in “I Want To Live !” I’ll never forget the poster on the side of the Park advertising “The Long, Hot Summer.” The ad copy for Angela Lansbury’s character Minnie read: “She just couldn’t help lovin' that man” ! The “man” was, of course, Orson Welles. Every time I pass the building on the #63 bus I think of these things.

As of January 2012 the exterior of the building looks much different than the photo at the top of this page. The Key Food pictured above has had a complete exterior renovation.I’m pretty sure the inside has been renovated as well.