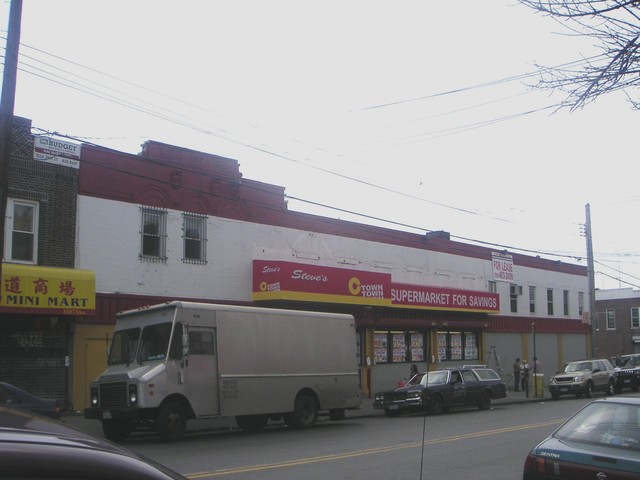 The Ritz Theatre was opened on March 25, 1926. It was equipped with a Robert Morton 2 manual theatre organ. By 1930 it had been renamed Fox Ritz Theatre. Closed on October 8, 1959 with Kim Novak in “Middle of the Night”. The Ritz Theatre name still can seen above the entrance to its current use as a supermarket.

I believe 2085 Myrtle Ave is the building that now houses a Blockbuster Video store. The building was a furniture store, and had a huge marquee on the front. It was across from the A&P (now Food Dynasty). In the early 1980’s, “Roman Furniture” redid the entire fascade of the building, and removed the marquee (I remember them doing this). Eventually, they went out of business, and Blockbuster Video moved in.
Of course, 2085 is in the old system, not the new Queens system. The RKO Madison Theater was 1562 Myrtle Avenue in the old system and the old address for the Belvedere was 2576 Myrtle Avenue. That would put this Ritz theater about half way between the Madison and Belvedere theaters. Being an odd number it would be on the same side of Myrtle as the Ridgewood theater.
This would lead us right to about the site of the Blockbuster Video building. Unfortunately, I don’t remember what the building istelf looked like before the early 1980’s fascade resurfacing. I only remember the marquee. I believe this is the location of the Ritz Theater. The Blockbuster Video’s current address is 60-15 Myrtle Avenue.

Posted by Theaterat for PhilPhil. The Ritz theater on th Av and 46th st. was hardky ritzy! This was a long and narrow theater with 2 blocks of seats seperated by three aisles. The theater kind of resembled the Harbor inside, but with no balcony or deco features.t was a dirty last run house that generally showed 2 movies. My aunt lived around the corner on 46th st. between 8th and 9 th. aves, so that is how I got to know this theater. There usually was a rowdy crowd, and a noisy one too. I went there a few times, but I nevet really liked to go there. Local residents used to call this theater “the Ratz”. Posted by Theaterat for PhilPhil

The Ritz Theatre on 8th Ave and 46th Street, Brooklyn holds many fond memories for me. I remember going there for Saturday Matinees and 10 cartoons would be shown along with the regular 2 features. Once in a while they did other things like have model plane races in the theatre with the planes hanging on wires strung from the rear up to the stage area. Other times they gave dishes away to parents. I remember the (hefty) matron dressed in white that was quick to respond with a flashlight in your eyes and a stern warning that “you’ll get kicked out” if you don’t stop (whatever it was you might be doing). It wasn’t the cleanest theatre, but it was a place to spend a Saturday afternoon during the mid 1940’s to mid 1950’s for me. The day World War II was over, I had just come out of the Ritz and people were in the streets banging pans together to celebrate the end of the war.

Ken Sele…One of my friends mother lived on 43rd St near 8th. Av. When I read your post, I remember her saying the same thing about the “pots and pans” celebration on the neighborhood.I was only about 3 years old at the time, but I bet it was a happy and memorable occasion.I remember the Ritz too, and clean it definately was not! Posted by Theaterat for Phil Phil

The Ritz Movie Theatre on 8th Avenue and 46th Street was just up the corner from where I lived. I went at a very young age, alone, childrens section, about three times a week. I must have seen 100s of movies, old and new. I remember the cartoons on Saturday, one right after the other, and remember contests, like the yo yo contests. This would be in the late 40s early 50s. I became an expert in movie stars and movies before I was 12.

The Theater appears to be being used as a supermarket. Any historic ornamentation survive inside?

The NY Times for October 22 1959 has a short article reporting that the Ritz Theatre at “Broadway and Eighth Avenue, Brooklyn, owned by the Interboro chain of theaters has been sold to the K. L. & G. Real Estate Corp.” “The theatre section will be converted to a Dan’s Supermarket while a store has been leased to the Imperial chain of cleaning stores”.

For some reason my brother and I never went to the Ritz very much and we lived just a few blocks down on 44th St near N.U. The one time I remember going was during a major snow storm in the late 40’s or early 50s. The Loews 46th and Boro Park were are main theaters.

Correction: Closed October 8, 1959 with Kim Novak in “Middle of the Night” and was soon gutted to make way for a new supermarket. The article on its closure said it closed on the heels of the shuttering of the Endicott, Stanley, Electra and Bay Ridge as television was ending many neighborhood theater’s runs.