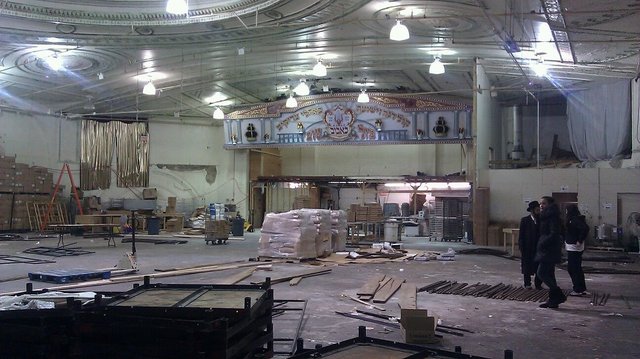 The Elton Theatre opened on September 29, 1928 with Janet Gaynor in “Street Angel” as a medium sized movie house before sound films. It was renamed New Elton Theatre in 1932. Showed B-and C-films. The theatre was quite plain, no balcony.

It was renamed Normandy Theatre in 1948 after being taken over by Liggett-Florin Booking Service, and they closed it in 1955. It became a factory for many years. By 2015 it was used for storage.

A plain looking theatre (inside and out)-especially when compared to nearby Loew’s 46th Street and Loew’s Boro Park theatres.

My father owned a luncheonette across the street from the Normandy on New Utrecht ave, and got to know the manager/owner a Mr. Green I recall. My mother who worked in the store, would leave me in the theatre to babysit me, I guess in 1950-51 or 52 and the matrons as we used to call them would look after me. I recall having to sit through A Streetcar named desire over and over, and for years after I had an aversion to it. Also have a memory of seeing an Italian film either bitter rice or maybe anna with silvano magnano. In the mid 50’s it was turned into a factory, and many of the Puerto Rican workers would come to eat lunch at my fathers store, and I would sometimes go with my mother in the factory/theatre to deliver lunch for the workers.

Here is a link to Normandy photo circa 1945:
http://brooklynpix.com/photo1/B/boropark44.jpg

This site never disappoints me. I’ve passed this building a few times and each time I’ve thought this looks like it was a Theatre. Sure enough I check this site and there it is.

I went to an epic rave party in this location. ;) There is a beautiful dome right in the center of the theater.

Nowadays is a warehouse.

Photo of marquee from Brooklyn Pics.