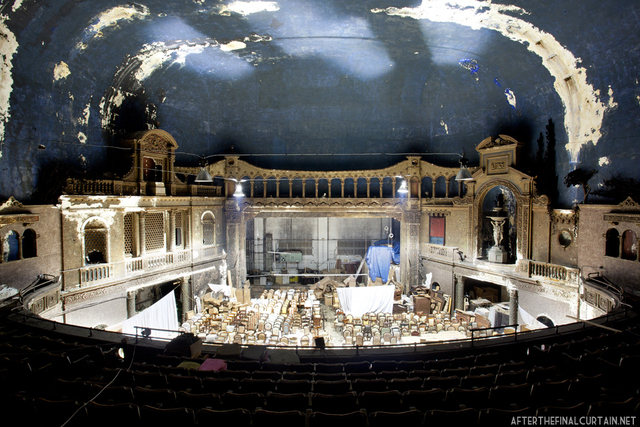 Built for the Universal Pictures chain, the Universal Theatre opened October 9, 1927 with the movie “Alias the Deacon” staring Jean Hersholt, and a stage show “Giggles of 1927” staring Eva Puck and Sam White. It was equipped with a Wurlitzer theatre organ. Designed by architect John Eberson in an Atmospheric/Italian Renaissance style, one side wall of the auditorium had the façade of an Italian garden, while the other side wall had a balustrade, fountain and wall gates. The ceiling replicated a moonlit sky, with twinkling stars and clouds rolling by. Within a year of opening, in September 1928 it was taken over by Loew’s Inc. and was renamed Loew’s 46th Street Theatre. After Loew’s it was finally operated by Brandt Theatres from 1966 and they closed the theatre showing movies in late-1969. It re-opened as the 46th Street Rock Palace, presenting concerts. That closed in 1973.

The balcony seats were still in place. The auditorium survived with little damage. Stage and dressing rooms were also intact. It was announced in summer of 2015 that the furniture store had relocated to MacDonald Avenue and had vacated the building. In August 2016 work began to gut the interior and it was converted into apartments.

Orlando, were that you had also lobbied for retention of the facade on the Lynbrook. The rendering of the new looks worse than the current Shore.

Thanks to Will Ellis for uploading these graphic photos of the interior of Loew’s 46th Street before the wreckers moved in. Click here to view

It’s a shame this once beautiful theater has been torn down. Even though I never saw a movie in this theater I did see a number of rock concerts and they were all good concerts. MY favorite was the band Rare Earth back in 1973. At first I couldn’t believe my favorite band was playing in Brooklyn several miles away from my home. Man, those were the days I tell you.

This theatre was not torn down, it was gutted andthe facadestill exists. The 47th Street fire escapes have been removed and storefronts and above that apartment windows exist. I repeat the facade and original 4 wall and roof exist. The discription should be changed to Gutted and it is now the 46th Street Apartments or Condos. I’ll let you know soon.

I also got pictures (over one hundred) of the reliefs behind the furniture store walls were taken out. They were in great shape as well as the interior exit doors and signs. All the exit doors were differently decorated plaster works of art. Unfortunately, there will be no book or uploading of the photos. Sorry.

What an absolute crime that this theater, in such decent condition, was not restored to join the success of other restored palace theaters in the NYC area, shameful.

Why no uploading, Orlando?

We saw some incredible live concerts at this place in the 1970’s.

I had to go to Boro Park yesterday and “Guess What?” While no one was watching the facade of this theatre was stripped of its' beautiful terra cotta arch windows, two lions' crests and roofline glazed terra cotta (in color) as well as all the brick work. Landlords always get away with anything they want instead of working it into the scheme of things. But then again this is Boro Park and that community is known for its' history or how to preserve it for they care not. Now the facade is plain grey and charcoal stripes. Horrendous and nauseating at the same time. At least in East New York they knew how to spare the four exterior walls and have some nostolgia for the former Loew’s Pitkin which leads into the shopping area. The former Loew’s 46th could have followed that example but did not. the “4515” shopping complex and apartment/condos lead the New Utrecht Avenue to the sleazy stores that line it from 45th St to 60th St. This area now looks worse than Pitkin Avenue in the 1970’s. No class in Boro Park. I will never look at or go there as long as I live. As the owner said “It’s only plaster inside”… and I’ll add “it’s only brick and mortar on the outside” Goodbye 46th Street Theatre, you will only live here at Cinema Treasures!

Mike (saps): Some things should be remembered for what they were and I am not upload saavy or own a computer. I have no use for it, but look at it this way… I don’t have to upload the photos of the way it looks now… no one should have to view this rape of a building again dot, dot, dot! Sorry for the delayed response. (Five months late).