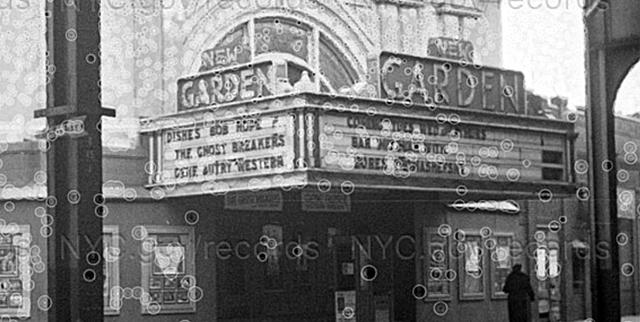 Built before World War I, this movie house was medium sized. It had no balcony. During the late 1940’s and 50’s the Garden was known by neighborhood children as “the Dump”. By then it was showing B- and C- grade films. The more elegant, Loew’s 46th Street (formerly the Universal, built in the 1920’s) was across the street from it.

Before air conditioning, the Garden featured a roof that opened at night.

The Garden theatre was the first or second theatre build next to the trains in the Borough Park section of Brooklyn. (West End and Garden theatres were built before the “el” structure was put up.)

This Garden theatre was definately torn down in the 1950’s. (I live a few blocks from it as a child) It was built before 1919 as I have pre World War II .If you look at the description above, it had a roof that opened. It was never used after the theatre was air conditioned. The address was 4601 New Utrecht Avenue. A supremarket was built afterwards, and that was followed by a lumber store and yard which is there now.

correction: as I have pre World War II pictures.

The Garden theatre probably build an open air theatre behind it(Enternace may have been on New Utrecht Ave.)If so, it did not last long. By 1927, Loew’s 46th Street(Universal)theatre was built and the Garden soon became a second & third run house. It was in very bad condition when I was a child. As I mentioned, it was torn down by the mid 1950’s.

I don’t remember any of the decorations in the auditorium, only the usherette screaming at us children on the weekend shows.