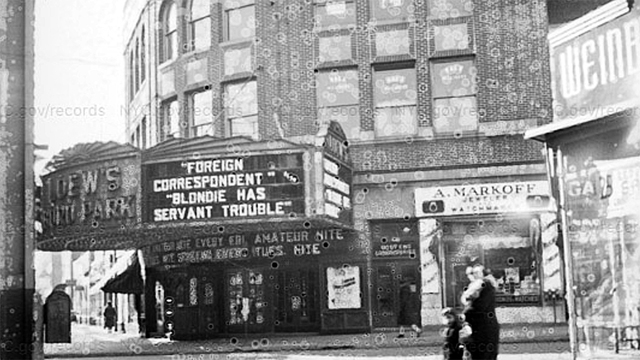 The B.F. Keith’s Boro Park Theatre opened on April 7, 1921 with 6-acts of Keith vaudeville and on the screen William S. Hart in “O'Malley of the Mounted”. On September 5, 1923, it was taken over by Marcus Loew, who also took over the adjacent West End Theatre. It was equipped with an Estey organ.

It closed in the early-1970’s and was torn down in August 1977. A branch of the US Post Office now stands on the corner under the elevated subway it once occupied.

In my first NYC trip in 1971, I got a tour of the BP from the son of one of the owners. It was closed and lit with only emergency power
as I recall. The owners had not known the Estey organ was in their theatre as two large boxes sat on each side of the pit—-the one on the left was hiding the console. With flashlights, we crawled up to
organ chambers on a steel ladder. There was grill work at the top.
The instrument had been vandalized as had the console. A friend brought one or two ranks out to San Francisco not long after. Still have a “Smoking in Balcony Only” sign from the BP. Loaned my color
interior shots to my host—-and never again saw them. Someone had tried to jazz up the interior by outlining things in bright orange paint which really didn’t help.

This ugly building appears to have replaced the Boro Hall. What a downgrade from the photo Lost Memory lined to…

The building in Lost Memory’s 1968 photo is the Blythborne post office. Enjoyed jloew’s informative post. I didn’t realize the organ was still there at that time. Like so many theatres, what a shame it is gone, a sign of the “modern” times.

To bad there are no shots from the LOEWS days.

I can see the “GUESS WHO’S COMING TO DINNER” one sheet on the poster frame clearly. Wish i had it.

The photo should be taken from New Utrecht Avenue as that is where the marquee was.

I’m new to this site and was just looking at movie theaters I use to attend as a kid living in Boro Park. Also use to go to: Lowe’s 46th St. Theater under the El on New Utrecht Ave. GOD its such a long time ago. Speaking of a long time ago I wonder if any you seniors out there remember a Boxing Gym right across the street from the Boro Park Theater ~ upstairs its name was: THE LIGHTER BOXING GYM. It was over a lamp store. I use to do some boxing there under the sponsorship of LightWeight Campion: Paddy DeMarco. Do any you guys/gals have any memories or info on this ?

GOD bless you ALL
Ray M.

Photo with marquee added to Gallery.

Thanks for the photo, HomecrestGuy. I just noticed, as the picture shows, that this theater featured an Amateur Night. I just wonder what that was like and how widespread – or not – these events were in other theaters at that time. This was a bit more ambitious than Dish Night.