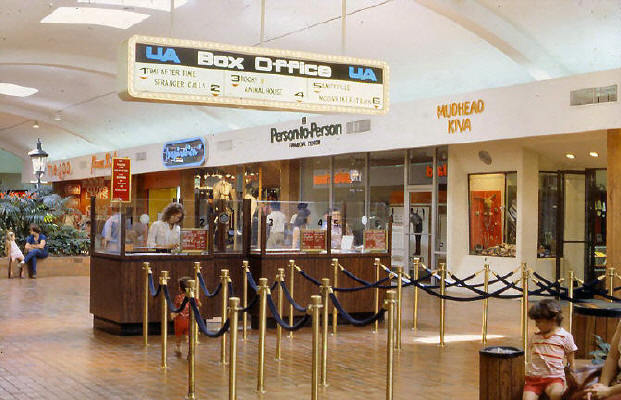 UA Cinemas-Phoenix was the second movie house to operate at the shopping center varyingly known as ‘Chris-Town’ (note the traditional, hyphenated spelling now disused). The first complex, Chris-Town Theatre(s) (see its separate entry on this website), opened as a National General single-screen in the 1960’s, was located outside this once-upscale indoor mall, and added screens organically through expansions.

UA Cinemas 6, on the other hand, was a purpose-built multiplex opened by United Artists Theatre Circuit on April 4, 1974 and was located inside the mall. The UA’s configuration was unusual. Its box office was not attached to its cinemas nor even adjacent. Rather, like at an open information booth, tickets were sold from an island satellite-counter located deep within the mall on the ground floor. Patrons would then walk some distance to board a one-way escalator. The lobby, snack bar, and auditorium entrances were all on the mall’s second floor.

Roger Cherry, serving in the 1970’s and 1980’s, was one of this theatre’s most respected managers. Indeed, Mr. Cherry informally oversaw all of UATC’s Arizona interests at a time when Phoenix and Scottsdale were that chain’s only two locations in the state (though UA Movies 5-Scottsdale typically did have a manager of its own as well; see that theatre’s separate entry on this site). The Arizona theatres then were formally part of one of UA’s Southern California districts. When UA stripped its western division managers of their snack bar commission in 1986 (an unwise policy that was eventually reversed), Mr. Cherry, along with many others, left UA. He did return soon afterwards but only on a temporary basis and as a favor to the company.

To distinguish the inside-mall UA Cinemas from the outside-mall Chris-Town Theatres—acquired by the Mann chain of California in 1973, various designations were used. For example, in the 1980’s (when Phoenix was one of the most over-screened cities in the country), the UA was referred to as “Christown 6” while the outside competitor was “Christown 5” (its screen count at that time). Obviously, circuit appellations were used as well (UA Christown, Mann Christown). However, generally and informally, the inside ‘cinemas’ were UA Christown Mall, while the outside ‘theatres’ were simply Christown. The former had a brief post-UA afterlife as Spectrum Cinemas in the 2000’s while the latter was sold to Arizona’s Harkins Theatres in the 1990’s.

Both inside and outside complexes were eventually replaced by still a third venue—a Harkins 14-plex—in 2007.

I remember seeing moves at this theater in 80’s. I thought it was cool taking the escalator up to watch the shows. Good memories.

I remember seeing moves at this theater in 80’s. I thought it was cool taking the escalator up to watch the shows. Good memories.

My name is Larry White I had the cleaning contract for the UA Cinema 6 for 12 years. Roger Cherry was the best friend I ever had. We were oddly matched. He had my back and I had his. Rogers untimely death at such an early age…. I know all there is about the theater and other theaters in Phx back from that time. Somewhere I have a stack of Pictures from the theaters remodel in the early 90’s.It was a very exciting time many wonderful memories