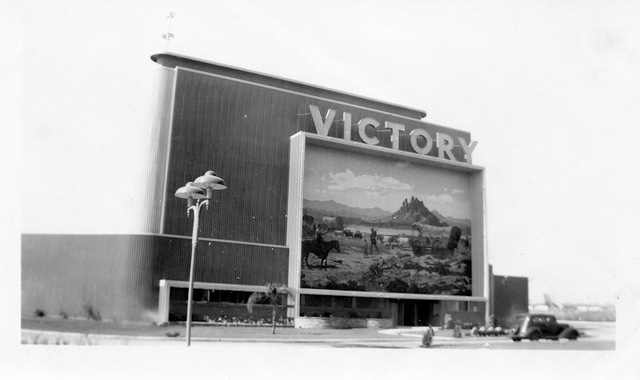 Opened May 25, 1949, this was a popular drive-in, located in the San Fernando Valley. There was an article published about it in Westways, the AAA magazine. The drive-in can be seen in the film "Ski Party," in a scene where Frankie Avalon and Dwayne Hickman take their dates to the movies. It was closed on February 13, 1977 with David Carradine in “Bound for Glory” & Paul Le Mat in “Aloha, Bobby and Rose” and was demolished later in 1977.

I am going to try to post the program info recording for the Victory I made in 1969. We went later to see the features.
Victory program info

If you are not able to click on it and play, right click on the link, and Save As.. to your desktop to play.

I used to set the marquee at the Victory drive-in in 1969. I was 19-years old and I had just bought my 1st home on Atoll Ave (about 3-blocks away) for $19,000. My house payments were $94 a month and my 3 hour a week job of setting that marquee more than made my house payments. When I was 15-17 yrs old, I set the marquee at the Mesa Theater on Crenshaw and Slauson in South Los Angeles. My older brother was the Asst Manager at that theater.

“The Raid”, an episode from the second season of “The FBI”, was partially filmed at the Victory. A stoolie was murdered in a phone booth by the concession stand, and a sharpshooter fired from atop the V. Great to see “The FBI” on location, and the Victory looked sharp. Whomever owned her at the time was obviously taking care of her. The episode was filmed in 1966.

When was the drive-in closed and demolished?

It was closed in 1977 and torn down that same year. Looking at Historic Aerials shot from 1978 no trace of it remained and there were business already built on site.

Final night of operation was February 13, 1977 with “Bound For Glory” and “Aloha Bobby and Rose”.

Tnere was an appeal to save preserve the mural on tne back of the screen, but it didn’t work.

Boxoffice, Feb. 13, 1954: “Pacific Drive-Ins is taking over operation of two local ozoners, the Victory and Gilmore, from Sero Amusement”