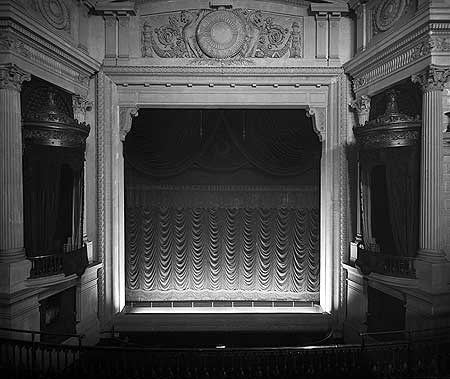 The New Theatre was opened on 26th December 1912 with a production of “Kismet”. Designed by the architectural firm of H. Farquharson, Richardson & Gill, seating was provided for 905 in the orchestra stalls, 519 in the dress circle, 54 in the balcony and 24 boxes. Seating in the orchestra stalls is below street level. It has a 37 feet wide proscenium and a 42 feet deep stage. There are 16 dressing rooms and six chorus dressing rooms with accommodation for 40 performers. The orchestra pit can accommodate 30 musicians.

In 1915 it was re-named New Queen’s Theatre, and films such as D.W. Griffith’s “Intolerance” were screened.

In August 1924, it was re-named Opera House. It was taken over by the Howard & Wyndham theatres chain in 1931. It 1938, the world premiere stage presentations of Noel Coward’s “Operette”, Sybil Thorndike in “The Corn is Green” and Leslie Banks in “Goodbye, Mr. Chips” were held at the Opera House. The theatre was also equipped with a Western Electric sound system, allowing for the showing of ‘talkies’, and it was used mainly as a cinema during World War II.

After World War II, big American musicals dominated the stage here, including “Oklahoma!”, “The King and I”, “West Side Story” and “South Pacific”. In the early-1960’s “My Fair Lady” was staged here.

In 1966 Howard & Wyndham applied for and were granted a bingo club licence, to cover the lean summer months. In April 1977, the Opera House was sold to Mecca Ltd. and was converted into a full time bingo club.

In early-1984, the owners of the Palace Theatre purchased the Opera House, and after a refurbishment, it re-opened as a live theatre again on October 1984 with a presentation of “Barnham”. Since then it has continued to be a successful theatre under the Apollo Leisure group of theatres and by 2017 it is operated by the Ambassador Theatre Group.

The Opera House is designated by English Heritage as a Grade II Listed building.

This was the last Theatre Operated by “Howard and Wyndam” The Panto Pruductions passed to HM Tennent )Binky Beumonts Company) “They then consentrated on Book Publishing.. and “Ciro Jewellers”

There are additional pictures and history on this webpage.

Picture from the Guardian