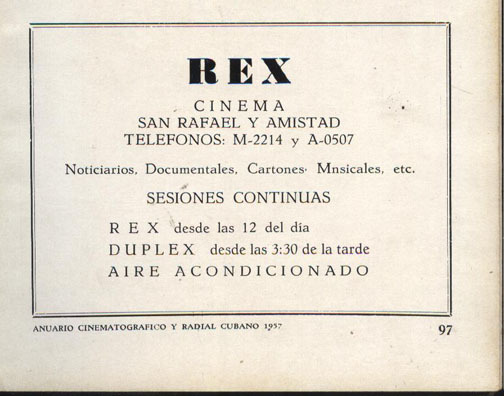 Located in the city centre on San Rafael at Consulado. The Rex Cinema was opened in July 1938 and was designed by architect Luis Bonich. All seating was on a single floor. For many years it operated as a newsreel & short subjects theatre. In late-1947, the Cine Duplex opened adjacent to the Rex Cinema, and they shared the same foyer. This too was designed by Luis Bonich.

The Rex Cinema was still operating in 1958.

Cinema Rex opened in 1938. It was located between Consulado and Industria streets. It showed short-length films, newsreels, Cuban “América”, North-American Warner-Pathé, Spanish “No-Do”, a Walt Disney cartoon, and a documentary or a comedy skit. A well-mannered older formal usher at the lobby before the navy blue velvet drapes usually announced, “A short while standing” to the new arriving moviegoers who would wait for the next showing. I saw “The movie pest” there and many a sprightly Donald Duck cartoon.