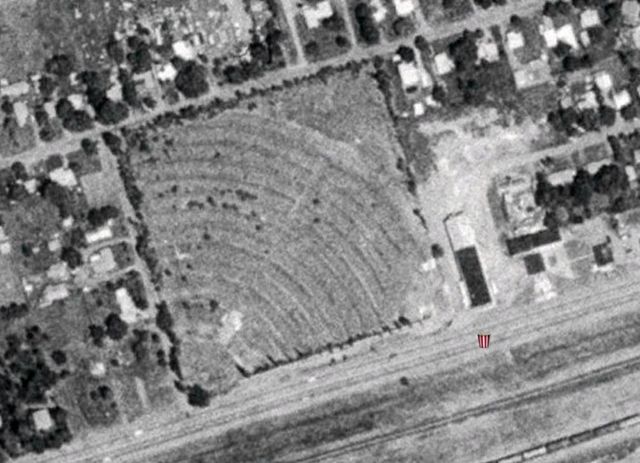 The 750-car Motor-In opened on June 8, 1946 with Vivian Blaine in “Doll Face”. It was Spokane’s second drive-in. It was later said that it drew 290,000 cars in the first year with actual admissions not given. On August 1, 1954, with a name change to the East Trent Drive-In, it became listed under Favorite Theatres banner in the Spokesman-Review. At the time Favorite Theatres operated three indoor and two drive-ins in Spokane.

On March 1, 1972 the Spokesman-Review announced the merger of seven Favorite Theatres in Spokane with the Sterling Recreation Organization (SRO). While being operated by SRO the East Trent’s listings disappeared from the newspaper after September of 1986. According to a December 1986 news article Cineplex Odeon purchased SRO for $45.5 million. There is no indication that the East Trent ever opened again.

In 1998 the East Trent Drive-In’s land was bought and put up for redevelopment. In 2006 its sign was donated to the Spokane Valley Heritage Museum and after being restored was put on display in 2011.

A picture of the theater’s roadside marquee from its gallery at Drive-ins.com is here.